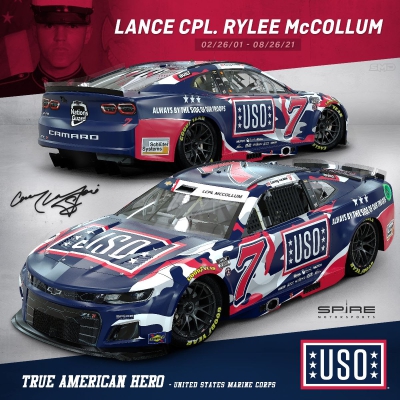 Spire Motorsports and Corey LaJoie will partner with the USO and The Coca-Cola Company for the 63rd running of the NASCAR Cup Series (NCS) Coca-Cola 600 at Charlotte Motor Speedway as NASCAR, its drivers and teams, pay tribute to the men and women who sacrificed their lives while serving in the United States Military.

The USO strengthens America's military service members by keeping them connected to family, home, and country, throughout their service to the nation.

“This Memorial Day weekend, we’re proud to partner with The Coca-Cola Company, as well as Corey LaJoie and Spire Motorsports, to honor our military service members and pay tribute to those who sacrificed their lives protecting our freedoms,” said Brian Cowart, Chief Development and Marketing Officer of the USO, the nation’s leading military nonprofit organization. “Together, we’re driving support and building connections between the public and the military community to keep our heroes in uniform strong and resilient.”

“Coca-Cola is incredibly proud of our 81-year partnership with the USO and our shared values of honoring our military service men and women,” said Alba Baylin, Vice President of Community and Stakeholder Relations for Coca-Cola North America. “The Coca-Cola 600 which is held on Memorial Day weekend, is a special time to bring racing fans together to recognize and honor our nation’s Armed Forces while bringing awareness to the USO’s mission of supporting those who have sacrificed and served our country.”

Meanwhile, LaJoie will pay tribute to Lance Corporal Rylee McCollum, a United States Marine, who was killed in action on August 26, 2021 in Kabul, Afghanistan. Lance Cpl. McCollum was manning a checkpoint at the Kabul airport when a bomb went off, killing him, 12 other American troops, and more than 100 Afghans.

McCollum’s name will be displayed on the windshield of LaJoie’s USO Chevrolet Camaro ZL1 throughout the weekend as part of NASCAR’s 600 Miles of Remembrance program.

“Representing the USO on Memorial Day weekend is a dream come true,” said LaJoie. “The Coca-Cola 600 is one of my favorite races on the schedule, as well as my home race. The opportunity to partner with the USO and Coca-Cola allows us to really show the service members and their families a great time at the track while remembering the brave men and women who paid the ultimate price for our freedom.”

“Spire Motorsports is proud to partner with the USO and Coca-Cola for this initiative to honor and support the servicemen and servicewomen of the United States,” said Spire Motorsports co-owner T.J. Puchyr. “At the same time, we’re humbled to have Corey LaJoie carry Lance Corporal McCollum’s name on the windshield of the No. 7. We can’t ever let the bravery of those who make the ultimate sacrifice on behalf of the United States to be forgotten. NASCAR does a tremendous job every Memorial Day weekend of making sure we recognize those who deserve the highest of honors. Spire is privileged to play a small part.”

The Coca-Cola 600 from Charlotte Motor Speedway will be televised live on FOX Sunday, May 29 beginning at 6 p.m. Eastern Daylight Time. The 14th of 36 races on the 2022 NCS schedule will be broadcast live on the Performance Racing Network and SiriusXM NASCAR Radio Channel 90.