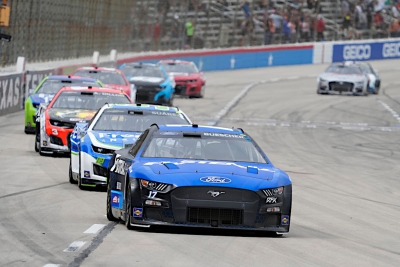 Chris Buescher powered his way into the All-Star Race Sunday night at Texas Motor Speedway, winning stage two of the All-Star Open to advance into the main event, ultimately earning an eighth-place finish in the star-studded 110-lap sprint in his home state.

Single-car qualifying set the field for the preliminary Open event, with Buescher putting down the fifth-fastest time to earn a solid starting position for Sunday. With the stages of the Open set for 20-20-10 laps, each stage winner and the Fan Vote winner would advance through to the All-Star Race.

After a P2 finish in stage one, Buescher restarted sixth for the second segment. A yellow would come out on lap 25 with the Fastenal Mustang in fourth, as he restarted third on the ensuing green flag. With the stage two end nearing in nine laps, Buescher took advantage of the low side in the second row to power to the lead, a position he would hold until the stage end to advance through.

The native of nearby Prosper, Texas, rolled off the grid near the tail end for the All-Star Race, but flipped his track position early as crew chief Scott Graves kept the Fastenal machine on track during the opening stage break. He restarted eighth in the second stage and held onto the track position throughout the 20-lap segment to finish ninth.

After a restart in the same position, Buescher again maintained pace and improved one spot through the third stage and would hold onto the momentum throughout the chaotic closing laps to finish eighth.