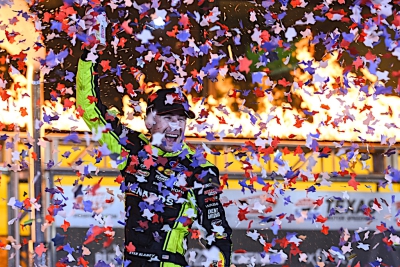 Blaney’s No. 12 Team Penske Ford ultimately beat Denny Hamlin in the No. 11 Joe Gibbs Toyota by .266-seconds in an overtime finish. But at one point, Blaney thought he may have taken the checkered flag twice - a caution flag flew the first time he was approaching the finish line in regulation – only seconds before he crossed the line.

He and his team thought he had won the race, not realizing the yellow light was on for an incident involving Ricky Stenhouse Jr. on the backstretch. Moments after cruising across the finish line, Blaney unstrapped the driver side window netting preparing to celebrate the big win with his team, which was high fiving one another and jumping onto pit road to applaud their apparent win.

NASCAR, however, ruled with video evidence that the caution light had activated for the Stenhouse incident on-track – yards before Blaney actually crossed the finish line.

As the cars made laps on the 1.5-mile track preparing for the overtime restart, Blaney could be seen trying to re-fasten the driver-side safety-net with one hand, steering the car under caution with the other. After finally getting the net secured, the race restarted and Blaney pulled away from the field going down the backstretch to take the checkered flag – the 26th different driver to win NASCAR’s prestigious All-Star event.

“I do want to thank NASCAR for letting me kind of fix it and not make us come down pit road. But yeah, that was really tough. Then having to do it all over again after trying to get that window net back up there.

"Great car, [crew chief] Jonathan Hassler, everybody on this 12-group did a great job.

“I know it’s not a points-winning race," he added. “But it’s going to be a lot of fun. Party is going to be pretty big."

The runner-up Hamlin was unhappy with the extra accommodation – the extended laps under caution - to allow Blaney to get the safety net back up and secured.

“You know, it’s tough because he deserved to win the race, but if you mess up and you break a rule – not intentionally, but there’s rules and we have rules in place for safety," Hamlin explained. “My crew chief is taking four weeks off [a penalty from a pit road infraction earlier in the season] because of safety.

“I nearly crashed him off of Turn 2 when I got squeezed there. If I send him into traffic and he’s got no window net, then what, right? Luckily, that didn’t happen."

Not only did the 28-year-old North Carolinian Blaney hoist the winner’s trophy, he certainly put in the effort on track all evening to deserve it. His 84 laps led was most in the field and he won Stage 3.

He ran up front all race and was fortunate to stay out of some early race drama involving winners of four of the last five All-Star races.

Defending All-Star race winner Kyle Larson was eliminated only 11 laps into the second stage when his No. 5 Hendrick Motorsports Chevrolet blew a right front tire sending him hard into the wall. He nursed the car through the infield to pit road but had to retire.

Only eight laps later, Kyle Busch – who had led every lap of the race at that time (47 laps) and won Stage 1 – suffered a tire problem and slowed toward the inside of the track. Ross Chastain, who was running second at the time guessed wrong on which lane Busch would slow into and hit him on the left side, slid up the track and into Chase Elliott’s No.9 Hendrick Motorsports Chevrolet before hitting the wall.

Busch’s pole-winning No. 18 Toyota was unable to continue as was Chastain’s No. 1 Trackhouse Racing Chevrolet and Elliott’s Chevrolet.

“Felt like the driver of the 1-car chose the wrong lane to go," Chastain said, managing a smile as he left the infield care center. “Our car was tight all night and just managing the tightness and saw Kyle have an issue, like a tire down, and I guessed left, and I should have guessed right. Big hits.

Stenhouse Jr., Buescher and Suárez each won a Stage in the All-Star Open to advance to the All-Star Race with Petty GMS Motorsport's driver Erik Jones earning the fourth and final entry into the big show as the Fan Vote winner. It was the second time Daniel Suárez had won the NASCAR All-Star Open (2017, 2022).