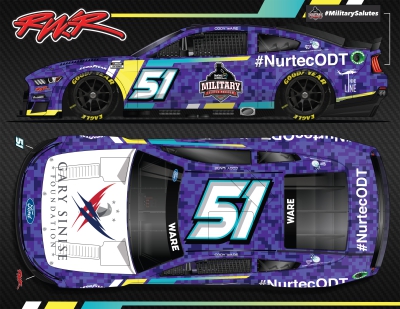 Rick Ware Racing announced today its partnership with Biohaven’s Nurtec® ODT (rimegepant) and Nine Line Apparel to honor the nation’s fallen service members during the Memorial Day weekend Coca-Cola 600 at the Charlotte Motor Speedway. Cody Ware, who will pilot the No. 51 Ford Mustang, will carry a special paint scheme with The Gary Sinise Foundation on board, the non-profit that the organizations will raise money for throughout the month of May.

Nine Line Apparel will offer a commemorative t-shirt honoring the fallen service members. Through the purchase of each t-shirt, the buyer can submit the name of a fallen service member to run on the hood of the No. 51 Ford Mustang. Proceeds from the t-shirt will be donated to The Gary Sinise Foundation.

“Our partnership with Rick Ware Racing and Nurtec ODT – this time supporting the Gary Sinise Foundation – is something that we’re honored to continue this Memorial Day,” said Rich Caponi, Chief Revenue Officer of Nine Line Apparel. “For us to help raise awareness and support for such a great foundation, while honoring those who have given their lives for our freedom, humbles us beyond words, and we are grateful for the opportunity.”

"As we approach Memorial Day weekend, we send our heartfelt gratitude and appreciation to Rick Ware Racing, Biohaven’s Nurtec ODT, and Nine Line Apparel for choosing the Gary Sinise Foundation as a charity partner and honoring those who gave their all," said Gary Sinise, actor, and founder of Gary Sinise Foundation. "The Gary Sinise Foundation strives to do all that we can to support our nation’s most severely wounded veterans, our service men and women, first responders and the families who sacrifice alongside them – especially those suffering the loss of their hero – the families of our fallen who we will never forget."

“We are beyond grateful for the opportunity to honor our nation’s heroes in the Coca-Cola 600 at Charlotte Motor Speedway," commented team owner Rick Ware. "Over the past year and half, we have been fortunate enough to create an awesome program to give back to our men and women in uniform, along with their families. RWR as a whole is honored to pay tribute to all those who have made the ultimate sacrifice for our freedoms, during the 600 Miles of Remembrance at Charlotte Motor Speedway."

Since launching the Military Salutes program in 2021, RWR and Nurtec ODT have visited nearly 50 military bases across the United States, including attending the ceremony commemorating the 80th Anniversary of Pearl Harbor in Hawaii. Working in partnership with Nine Line Apparel, the group has raised nearly $250,000 for various military charities and has honored over 1,300 fallen service members in special campaigns with RWR’s NASCAR Cup Series cars.

"We hear often from active-duty service members, veterans and their families about the impact migraine has on their lives," said Vlad Coric, MD, Chief Executive Officer and Chairman of Biohaven. "Through our sponsorship with Rick Ware Racing, we have been able to support the military community and honor our fallen heroes and their families. We are thankful for their service and dedication to protect our freedom. Our goal is to identify and collaborate with innovative partners to raise awareness of migraine and Nurtec ODT as a treatment option.”