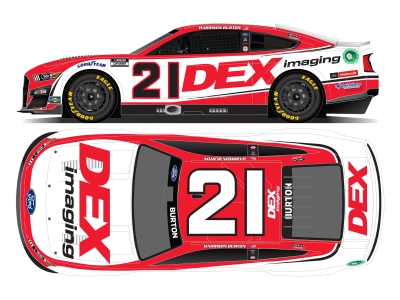 Harrison Burton and the No. 21 Motorcraft Quick Lane/DEX Imaging team are hoping to build on their recent speed on intermediate-length tracks as they compete in the NASCAR All-Star Race weekend at Texas Motor Speedway.

The rookie Burton is not assured of a starting spot in the main event, so he’ll have to either race his way in through the preliminary NASCAR All-Star Open or be voted in by fans.

Crew chief Brian Wilson said he and the crew are looking forward to the challenge.

“Everyone on the No. 21 is excited for the All-Star weekend,” Wilson said. “The format is always fun and entertaining.

“All-Star qualifying should be wild to watch with the pit crews included in setting the field.”

Wilson said the All-Star activities at Texas will give the Motorcraft/DEX team a chance to use the knowledge gained on similar length tracks at Kansas and Darlington. And it will give the team an opportunity to add to their notes headed into the next points-paying race – the Coca-Cola 600 at Charlotte Motor Speedway.

“Two weeks ago we had a solid 14th-place finish [at Darlington] and ran in the top 15 late in the race last week [at Kansas] as well,” Wilson said. “We’ll continue to build on our intermediate setups with confidence that we’ll contend for a transfer spot from the All-Star Open.”

And if that doesn’t work out, there’s a Plan B.

“I encourage all of the Ford fans to cast their votes for Harrison in the fan vote and tune in Sunday night,” Wilson said.

A practice session for Burton and the other Open drivers is set for Saturday at 6 p.m. (7 p.m. Eastern Time), followed by qualifying just after 6:30 (7:30 Eastern). Each driver will run one lap.

Then on Sunday, the NASCAR Open is scheduled to get the green flag just after 4:30 p.m. (5:30 Eastern). The race will consist of two 20-lap segments followed by a 10-lap run.

FOX Sports 1 will carry the coverage both days.