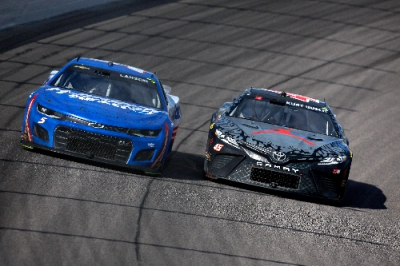 They say an old dog can’t learn new tricks, but they never say an established NASCAR champion can’t win on a track they’ve never won at before. That is exactly what happened with Kurt Busch, and his No. 45 Toyota Camry for 23XI racing on Sunday afternoon, after leading 119 of 267 laps.

“It’s all about teamwork,” said Kurt Busch. “I mean, I don’t do this alone, and the way that Toyota has helped us, JGR. My little brother has been so important just on the family side of, hey, you’ve got to get through these steps.” It all started with Christopher Bell, who is a Toyota teammate to Kurt, starting on pole with the young and hungry Tyler Reddick, who had finished second in the last four starts prior, starting second right beside him when they took the green flag a little after 3 p.m. Eastern.

Chase Briscoe was the cause of the first caution of the AdventHealth 400 at Kansas Speedway on lap 7, after he took a ride sideways through the infield grass after spinning in turn four. Reddick then led from lap 10 and didn’t let go.Then the left rear tires became most of the drivers Achilles Heel during the race. The first tire related issue was on lap 32, which took BJ McLeod as its first victim, bringing out the second caution.

Bell then regained control of the lead from lap 37, then Daniel Suarez had a tire go down in turns three and four, which caused him to spin and bring out the third caution of the race. Bell continued to lead until 64, when Ricky Stenhouse Jr led for two laps while green flag pit stops happened. Kyle Busch then went on to take the lead and won stage one in the process, until getting knocked down by a bad pit stop which put him deep in the field.

William Byron, who was the first Chevrolet driver to lead under green conditions, led from lap 88 til 112, until Kurt Busch would be up front for the first time of the day. The fourth caution was brought out by Kevin Harvick after he spun in turn two reentering the race after a green flag pit stop routine. After the restart, the lead changed 3 times in three laps with Chase Elliott, Kurt Busch, and Ryan Blaney all battled in contention to win at Kansas. Kurt BUsch would lead from lap 138 til the end of stage two, which he won and score 10 extra points in the process.

A driver who was all the way deep in the field finally made his way up front, which was Kyle Larson, who won at Kansas back in October during the playoffs. He then took control of the AdventHealth 400 after stealing it from Kurt Busch on lap 202 to 203, after the caution was back out when Elliott spun in turn three which caused him to be stuck in the wet grass. Kyle then lost the lead after getting into the wall. He had an incredible save on the backstretch, but then gave veteran Kurt Busch the lead until lap 231.

Then the final caution of the race happened with Harvick leaking fluids from his Ford Mustang on the front straightaway. From then, Larson looked like he had the win in the bag for his second win of 2022, until lap traffic became a factor on lap 258. He was then passed by Kurt Busch, who led the final nine laps towards his 34th career win in the NASCAR Cup Series and his first win at the Kansas Speedway.

Larson after the race walking back to his hauler on whether he could have done anything different, said, “I'm sure there's things I could have maybe done, but I just need to go back and look. When he wanted to get by me, maybe I could have done a little bit better job, but it was gonna be tough.” Larson led a total of 29 laps to finish in second place by 1.413 seconds

At the end, the 2022 AdventHealth 400 at Kansas Speedway had a total of 8 cautions for 47 out of 267 laps. The race had 18 lead changes, and lasted 3 hours, 13 minutes, and three seconds for an average speed of 124.476 mph. Next week, the NASCAR Cup Series has its 38th annual All Star Race at the Texas Motor Speedway on Sunday May 22nd. The race will have an open race starting at 6 p.m. Eastern, followed by the All Star Race itself starting at 8 p.m. on FS1, MRN, and Sirius XM NASCAR Radio.