Kyle Busch A New Addition to the Family 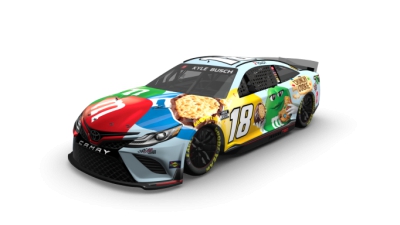 As the NASCAR Cup Series heads to Kansas Speedway in Kansas City for Sunday’s AdventHealth 400, Kyle Busch has already had a winning week.

After Busch spends the rest of his week getting acclimated to the new addition to the family, he’ll head to the Midwest in hopes of adding another addition to the trophy case on Sunday. With two Cup Series wins to his credit at Kansas, Busch has nine top-five finishes and 11 top-10s in his last 15 starts at Kansas His second Kansas win last May makes him the defending winner of Sunday’s event.

While the two-time Cup Series champion’s recent record at Kansas is quite impressive, there was a time when that wasn’t the case. Busch struggled mightily his first seven seasons competing at the 1.5-mile oval.

The Kansas oval was built in 2001 and originally featured a constant 15 degrees of banking in the turns. But it underwent a massive renovation leading into its October 2012 event. The changes included repaving of the existing track surface, reconfiguration of the oval, and the addition of a new infield road course. The oval’s geometric shape also was changed to feature variable banking of 17 to 20 degrees in the turns.

To say that Busch didn’t take well to the new surface would be quite the understatement. From October 2012 to 2013, he had three consecutive DNFs (Did Not Finish) there, with accidents ending his day each time, for final results of 31st, 38th and 34th.

Feeling snakebit on the new Kansas surface, Busch and his M&M’S team took a different approach starting with the April 2014 race by starting from scratch with a brand new car. They attacked Kansas with the hopes that a fresh outlook would produce vastly different results. While a pit-road speeding penalty cost them precious track position and an even better finish in the race, the result and effort was much different than the three previous trips. Instead, they were competitive enough to turn the corner in terms of results.

In the October 2014 Cup Series race, Busch brought home a third-place finish at Kansas. Those who know Busch knows he has never cared much for moral victories. However, the momentum kickstarted by his first Kansas top-five has remained to this day. Finally, with the surface starting to wear, Kansas has become a place much more agreeable to Busch’s driving style. He brought home his first victory there in NASCAR’s top series in May 2016 and added the aforementioned second win there last spring.

M&M’S Crunchy Cookie will once again be adorning his No. 18 Toyota at Kansas on Sunday. M&M’S Crunchy Cookie combines two favorite treats – M&M’S and chocolate chip cookies – and is now available nationwide. It’s bound to give race fans a fun, nostalgic snack to enjoy during this weekend’s race.

So as Busch heads to Kansas this weekend, they’ll be celebrating the new addition to the family, while also hoping to add another addition to the trophy case on an already exciting week for the entire Busch family.