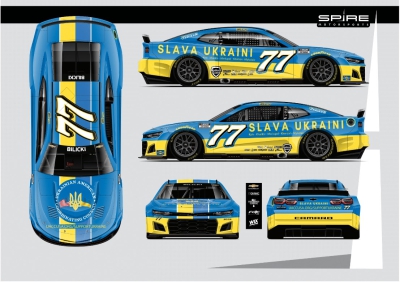 Josh Bilicki will carry the colors of the Ukranian flag in this weekend’s NASCAR Cup Series (NCS) AdventHealth 400 at Kansas Speedway where the driver of Spire Motorsports No. 77 Chevrolet Camaro ZL1 will show his support for ongoing humanitarian efforts in Ukraine.

Bilicki will carry in the insignia of the Ukranian American Coordinating Council (UACC) on the hood of the No. 77 Chevy while the phrase Slava Ukraini (Glory to Ukraine) will be featured across the machine’s door and upper-rear quarter panels. Ukranian cities Kharikiv, Kherson, Kyiv, Mariupol and Mykolaiv will also be incorporated throughout Bilicki’s paint scheme.

The UACC is a Ukrainian-American organization founded over 50 years ago by Ukrainian men and women who fought for freedom in World War II and immigrated to the United States, becoming citizens and supporters of both countries. Today, the UACC’s focus is to provide urgent help and support for Ukrainian civilian defense units by procuring and shipping helmets and body armor to Ukraine in bulk quantities.

“In 1991 when Ukraine became independent, many believed that their dreams had finally come to fruition, showing those in Ukraine the path to true democracy,” explained Oksana Tscherepenko, VP of the UACC.  “Now, as we watch the occupiers threaten Ukraine’s right to freedom and democracy, it becomes obvious that this dream is not fully realized and our men, women, children and elderly are being killed just for protecting their fundamental rights to democracy. Many civilians are defending themselves and Ukraine with little training and without proper gear or protection.

“After receiving a license from the U.S. State Department, the UACC purchased gear and received incredibly generous donations from individuals, law enforcement agencies, and state national guards, allowing us to ship an abundance of ballistic gear including helmets, vests and plates. One hundred percent of that gear is delivered to civilians in Ukraine who need it the most.”

“As I prepare for this weekend’s race in Kansas, there are civilian men and women defending their freedom and lives on the other side of the world in Ukraine,” said Bilicki. “It’s easy for us to take our freedom for granted, which allows us to enjoy life, liberty and do what we love. The UACC’s mission is to provide support for Ukrainian civilian men and women, who often don’t have the equipment they need to protect themselves in their struggle for freedom. Our message this weekend is that we support the ongoing global humanitarian effort and provide hope to the men, women and children of Ukraine.”

The AdventHealth 400 from Kansas Speedway will be televised live on FS1 Sunday, May 15 beginning at 3 p.m. Eastern Daylight Time. The 13th of 36 races on the 2022 NCS schedule will be broadcast live on the Motor Racing Network and SiriusXM NASCAR Radio Channel 90.