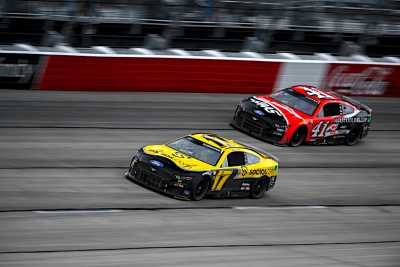 Starting 18th, the No. 17 hovered around the top-20 until the competition caution at lap 30. Towards the second half of stage one, the Socios.com Ford moved up to 14th before contact with the outside wall in turn two, relegating Buescher to 23rd to end the stage.

Buescher kicked off stage two from the 24th position, which would go green long enough for a green flag pit stop cycle. Crew Chief Scott Graves called the No. 17 in on lap 136 for four tires, fuel, and adjustments as Chris had a hard time moving forward under green flag conditions. He would end stage two in 21st.

Buescher would restart the final stage from 25th, going one lap down before a caution would earn him the lucky dog. After a huge wreck off turn two on lap 254, Buescher earned some spots back and ultimately powered through the final restart to finish 16th.

The Cup schedule heads next to Kansas Speedway, where race coverage next Sunday is set for 3 p.m. ET on FS1. Radio coverage can also be heard on MRN and SiriusXM Radio.