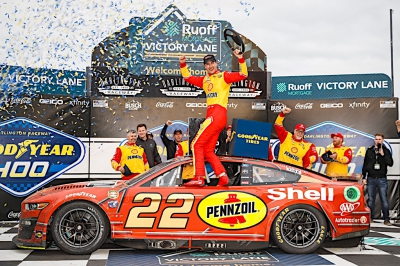 Joey Logano used the back bumper of William Byron to snap his 40-race winless streak at Darlington on Sunday.

In the final two laps, Logano caught up to then leader William Byron in Turn 3 and gave Byron a shot in the bumper. As a result, that would send Byron into the outside wall and allow Logano to pass by for the lead and go onto win.

Logano said post race that it was retaliation from earlier in the race when Byron got into him.

“You’re not gonna put me in the wall and not get anything back. That’s not how that works,” Logano told FS1 post-race.

Meanwhile Byron would go onto finish 13th after significant damage was made to his car after the contact with Logano.

Byron was noticeably upset with Logano during his post-race interview with Fox Sports.

“He’s just an idiot. He does this stuff all the time. I’ve seen it with other guys. He drove in there 10 mile an hour too fast and with these Next Gen cars he slammed me so hard it knocked the whole right side off the car and no way to make the corner. He’s just a moron,” Byron told FS1 post-race.

Rounding out the top five were Tyler Reddick in second, Justin Haley in third, Kevin Harvick in fourth and Chase Elliott in fifth.

Justin Haley who finished third, scored his first top-five series finish since winning at Daytona in July of 2019.

Kevin Harvick who finished fourth, scored his 13th straight top-10 place finish at Darlington Raceway, breaking the tie he had with Bill Elliott for the most consecutive top tens at the track.

Notable and reigning Cup Series champion Kyle Larson finished 36th after an engine failure on Sunday. This marks his fifth finish of 29th or worse this year in 12 races. In all of 2021 he had just four finishes of 29th or worse.

Rounding out the top ten were Christopher Bell in sixth, Michael McDowell in seventh, Ricky Stenhouse Jr. in eighth, Austin Dillion in ninth and Daniel Suarez in tenth.

The NASCAR Cup Series will head to Kansas Speedway on May 15th at 3:30 p.m. Eastern on FS1.