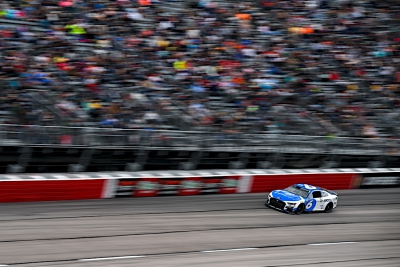 Brad Keselowski’s day at Darlington came to an early end Sunday afternoon in the annual NASCAR Throwback race, as the No. 6 blew a tire near the end of stage two, causing damage too severe for the Socios.com Ford to continue.

Sporting the iconic 2004 Mark Martin scheme, Keselowski had some early ground to make up after spinning on lap three for the first of nine cautions in the race. He ultimately came back from down a lap to earn the lucky dog at lap 55, resetting his track position for the remainder of the opening 90-lap stage.

There, he ended 28th, before rolling 26th for the second segment, which ran green for the next 60 laps. Then, at lap 168, Keselowski had a tire go down and made contact with the wall, ultimately causing damage too severe on the front end. He would finish 34th.

The Cup schedule heads next to Kansas Speedway, where race coverage next Sunday is set for 3 p.m. ET on FS1. Radio coverage can also be heard on MRN and SiriusXM Radio.