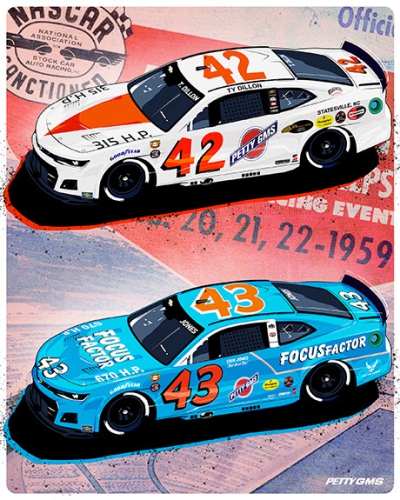 As the NASCAR Cup Series (NCS) embarks on its traditional Throwback Weekend at Darlington (S.C.) Raceway, Petty GMS will pay tribute to Lee and Richard Petty by throwing back to the inaugural Daytona 500 in 1959. Ty Dillon will honor the patriarch of the Petty family, Lee, by sporting the No. 42 design that captured the victory in the maiden event, while Erik Jones will showcase Richard’s iconic Petty blue scheme on the No. 43 entry.

While stock cars have been racing on the Daytona Beach shores since the 1930s, NASCAR’s first 500-mile race at the closed oval, now known as Daytona International Speedway, was held on Sunday, February 22, 1959. The event featured entries from both the Grand National (today known as the Cup Series) and Convertible Division. The Petty father-son duo would sport one of each, with Lee driving the No. 42 hardtop and Richard piloting the No. 43 convertible.

Lee Petty, who began his driving career at the age of 35, battled with John Beauchamp in the closing 30 laps. Coming side-by-side at the white flag as the only two cars on the lead lap, both caught Joe Weatherly on the backstretch, creating a three-wide spectacle. After a close finish, Lee and Beauchamp together drove to Victory Lane before NASCAR named Beauchamp the winner. Lee immediately protested the result and after three days of review and photo evidence, the No. 42 was declared the official victor.

A member of the 2011 NASCAR Hall of Fame class, Lee Petty won a total of 54 races, including 11 in 1959, and three championships. The inaugural Daytona 500 win marked Lee’s only victory in “The Great American Race.”

“It’s such an honor to not only drive the No. 42 each week but run Lee’s inaugural Daytona 500 victory scheme this weekend at Darlington,” said Dillon. “I don’t know if people realize the No. 42 was originally made famous by Lee, Richard’s father. He was the originator of the Petty name and very successful from day one in NASCAR as we know it. I hope to bring honor to his name and number with a modern twist and bring it back to Victory Lane.”

Despite being one of 20 qualifiers who entered in a convertible, Richard Petty qualified in the sixth position. Driving the No. 43 for the first time in competition, the 21-year-old experienced an engine failure just eight laps into the race, cutting his Daytona debut short. During the 1959 season, Richard went on to earn NASCAR Rookie of the Year honors after garnering six top-five and nine top-10 finishes.

Richard Petty, named “The King” for good reason, captured a record-setting total of seven Daytona 500 victories between 1964 and 1981. Throughout his legendary driving career, the inaugural member of the NASCAR Hall of Fame racked up the most wins (200), most poles (123), tied for most championships (seven), most wins in a season (27), most consecutive wins (10), and most starts (1,185).

“When you look at the history of NASCAR and the No. 43, everybody knows who Richard Petty is whether they are a race fan or not,” said Jones. “Having a chance to spend time with him is pretty cool, just talking to him and hearing the stories that he and Dale (Inman) share. I’m a really big fan of the history of our sport and to hear some of the stories first-hand is a neat experience. The ultimate goal for this year is get a win though and return the No. 43 back in Victory Lane. To share that moment with “The King” would be a pretty cool moment for me.”