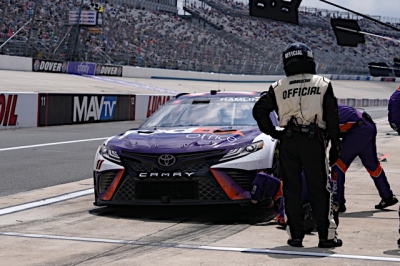 Crew chief Chris Gabehart and crew members Derrell Edwards and Blake Houston from the No. 11 Cup Series team of Denny Hamlin have each been suspended from the next four events for a loss of tire / wheel during the Monday portion of the postponed Drydene 400.

Crew Chief Matt Swiderski and crew members Keiston France and Jonathan Willard for the No. 16 NCS team driven by AJ Allmendinger have also been suspended from the next four events for a loss of tire / wheel during the event.

Crew chief Bruce Schlicker with the No. 16 XFINITY team of AJ Allmendinger has been fined $5,000 for lug nut(s) not properly installed.

Jason Houghtaling has been indefinitely suspended for violating section 4.4.e:

“Member actions that could result in a fine and/or indefinite suspension, or termination: