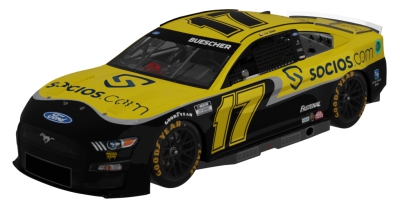 QUOTE WORTHY
Buescher on racing at Darlington:
“Darlington is a very fun track, and the whole weekend itself is really special to be a part of with all the throwback stuff going on. We’ve got a really cool throwback ourselves to our friend Matt Kenseth, and we feel really good about where we’re at heading into the weekend. Dover was a blast for us – although we’re not content – and we know we have more in the tank to keep this thing rolling and keep improving.”

Last Time Out
Buescher finished eighth at Dover on Monday, his best career finish at the Monster Mile and third top-10 of 2022 after leading the field to green on Sunday, his first career NASCAR pole.

Socios – the leading blockchain platform for the global sports and entertainment industry – returns as a primary partner for RFK in 2022 on both Ford Mustangs this weekend in Darlington. The company initially joined RFK in 2021 as the primary partner on both cars at Watkins Glen.

This season, Socios owned content centered around the annual Darlington Throwback weekend and allowed fans to vote on their favorite gear and appearance for this weekend’s teams in South Carolina. Buescher and the No. 17 team will throw back to the iconic Dewalt scheme Matt Kenseth ran in 2004.