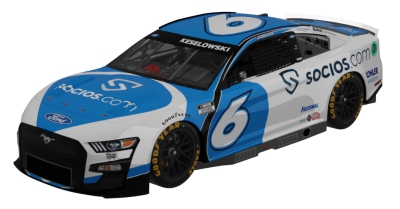 QUOTE WORTHY
Keselowski on racing at Darlington:
“Darlington is such a special place, not only the race track itself, but the history of it and everything they do for our sport. The throwback weekend is really cool and we’re glad to be part of it and honor a legend in our sport in Mark Martin. Darlington has been good to me before, and this team has had this race circled for a while now so we’re looking forward to the weekend.”

Keselowski earned a stage point early at Dover last weekend and showed speed early before going on to finish 20th in the Kohler Generators Ford.

Socios – the leading blockchain platform for the global sports and entertainment industry – returns as a primary partner for RFK in 2022 on both Ford Mustangs this weekend in Darlington. The company initially joined RFK in 2021 as the primary partner on both cars at Watkins Glen.

This season, Socios owned content centered around the annual Darlington Throwback weekend and allowed fans to vote on their favorite gear and appearance for this weekend’s teams in South Carolina. Keselowski and the No. 6 team will throw back to the iconic blue and white Mark Martin scheme from 2004.