Chase Elliott takes home his first win of the 2022 season 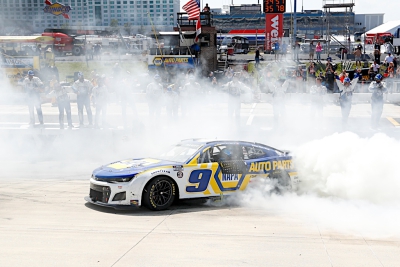 Elliott led the final 53 laps of the 400-lapper and pulled away from Ricky Stenhouse Jr. for a 2.577-second victory in an action-packed race that was slowed 12 times for caution periods – including a red flag weather delay on Sunday that necessitated pushing the restart to Monday.

It’s the 14th career win for the driver of the No. 9 Hendrick Motorsports Chevrolet and a historic fifth win for the team in 2022. It is the first time in NASCAR history a team has had all four of its drivers win races in the opening 11 races of a season.

The 26-year old Georgia-native Elliott had to work at this one for sure with 17 lead changes among 10 drivers.

“Just had some good circumstances finally” the sport’s reigning Most Popular Driver said of his first oval track win since he won the 2020 series championship at Phoenix Raceway. “Just really appreciate [crew chief] Alan [Gustafson] and our entire team for just sticking with it.

“We had some tough races over the last four or five months and just great to get NAPA back to victory lane and great to get Hendrick Motorsports in victory lane. So proud. This means a lot in a lot of different ways. Just appreciate all the effort.’’

“It’s been a fun day and we’re certainly going to enjoy this,’’ Elliott continued, after thanking the fans that came out for the Monday race conclusion.

“Like I told them [crew] after the race, those guys, they’ve been deserving of one for a while so glad we could get across the line first. We’ll enjoy it for a few days and then go to work next week.’’

He came a few car lengths from victory, but runner-up Stenhouse was nearly as happy as the winner after the race. It marked only the second top-10 of the season – second top-20 – for the driver of the No. 47 JTG Daugherty Racing Chevrolet and was his best showing since a runner-up finish on the Bristol (Tenn.) Dirt Track back in March, 2021.

Stenhouse finished fifth in Stage 2 and ran among the top-10 for the last 150 laps of the race moving into second place behind Elliott with 51 laps remaining and chasing down Elliott’s No. 9 Chevrolet for the remainder of the race.

Last week’s race winner Ross Chastain finished third in the No. 1 Trackhouse Racing Chevrolet but had some contact with three-time Dover winner Martin Truex Jr. on the final lap fighting for position. The two touched and Truex’s No. 19 Joe Gibbs Racing Toyota spun around. He recovered to finish 12th and the two drivers exchanged words afterward on pit lane.

Asked about the last lap incident and the encounter after the checkered flag with Truex, Chastain smiled and said “we were talking about where we were going fishing next week.’’

Joe Gibbs Racing driver Christopher Bell was fourth followed by 2021 Dover winner, Hendrick Motorsports’ Alex Bowman. His teammate, Kyle Larson was sixth followed by JGR driver Kyle Busch, who led the most laps (103) on the day and was a strong contender for the trophy before getting caught on pit road during a caution period.

Busch and Bowman – who were running first and second at the time – pit on lap 322 only to have a caution come out for A.J. Allmendinger, whose Chevy lost its wheel. The two drivers restarted toward the tail end of the lead lap and still managed to race their forward to the top-10 finishes.

It was rough day for former Dover winner Denny Hamlin, who led 67 laps and won Stage 1, but had two major snafus derail what looked like a promising day.

While leading the race, Hamlin’s left front tire came off as he exited pit road following a stop. It set him to 29th place. He drove his JGR No. 11 Toyota all the way back into the top-five only to be collected by a spinning Ford driven by Cody Ware just after the race’s midpoint.

The damage to Hamlin’s Toyota took away any shot for the victory and he finished 21st. The perennial championship contender and three-time Daytona 500 winner has only one top-10 – a win at Richmond last month – on the season.