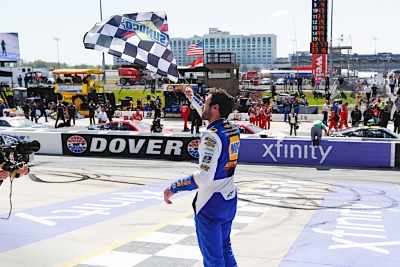 Elliott took the lead from Ross Chastain after a restart with 53 laps to go and went on to pick up his first Cup win of the season.

“Let’s enjoy it,” Elliott said to his team over the radio after the race.

With his win on Monday, Elliott snaps a 26-race winless streak. He is also the ninth different winner in the first 11 races of the season.

Driver No. 9 was on the inside lane when the race went back to green. Elliott passed by Chastain when the green flag waved and would hold onto command of the lead for the remainder of the race picking up his 14th NASCAR Cup Series win.

Rounding out the top five were Ricky Stenhouse Jr. in second, Ross Chastain in third, Christopher Bell in fourth and Alex Bowman in fifth.

Kyle Busch led a race-high of 103 laps but bad luck would come his way when he pitted under green flag and a caution would come out after AJ Allmendinger’s car lost a wheel. That would put Busch restarting 16th on the restart. He would go on to finish 7th.

Rounding out the top ten were Kyle Larson in sixth, Kyle Busch in seventh, Chris Buescher in eighth, Kevin Harvick in ninth and Erik Jones in tenth.

The NASCAR Cup Series will head to Darlington Raceway on May 8th at 3:30 p.m. Eastern on FS1.