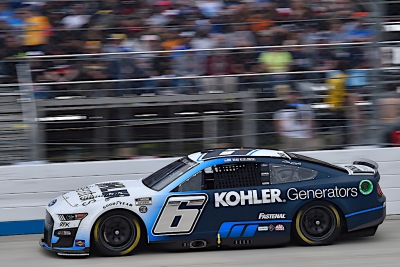 Brad Keselowski had early speed in the Kohler Generators Ford Mustang and earned himself a stage point in the first segment before going on to finish 20th at Dover Monday afternoon.

Inclement weather caused the race to be paused early on in Sunday’s action as just 69 laps were completed. With rain overnight, the race resumed back at noon on Monday.

The 2012 Dover winner restarted Monday in 14th and drove the Kohler machine up to 10th in a matter of 50 laps, earning a stage point at the stage break 120 laps in. After restarting ninth for stage two, Keselowski held his own and worked his way inside the top five to third by lap 155. From there, the handling went away on the No. 6 as he dropped to 13th by lap 188.

The availability of tires turned out to play a factor throughout the field but Keselowski managed and continued to fight through the handling. He ended stage two in 16th and would restart 14th for stage three, but lost ground over the course of the next 50 laps. He was one of numerous cars to lose a lap to the leaders and was never in the right position for the free pass to finish 20th.

Darlington is next up on the schedule with the annual Throwback race set for next weekend. Sunday’s race is set for 3:30 p.m. ET on FS1, and can also be heard on MRN and SiriusXM Channel 90.