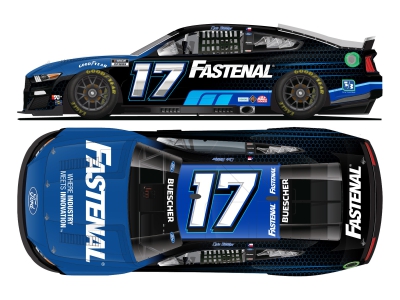 QUOTE WORTHY
Buescher on racing at Dover:
“Dover is one of the more trickier places we go to, and it’s so unique in everything the corners challenge you with. Momentum is key and being able to roll the center, and we have been better there the last few races. Consistency goes a long way in this stretch of the season, and we’re looking forward to the weekend in our Fastenal Ford.”

Last Time Out
Buescher was caught up in a multi-car incident early in Sunday’s race from Talladega relegating him to a 38th-place finish.

Fastenal, in its 12th season with RFK in 2022, makes its eighth appearance with the No. 17 this weekend. In its early days with RFK, Fastenal originally was a partner with the No. 99 team before moving over to the No. 17 team since. They were also the primary partner on the No. 60 Xfinity Series entry that captured the owner’s championship in 2011.

Fastenal will feature top suppliers PIP, Weiler, Dupont, APEX and Brennan Industries on Buescher’s Mustang as he competes this weekend. For more information on these suppliers, visit Fastenal.com, and stay up-do-date on social @FastenalCompany.