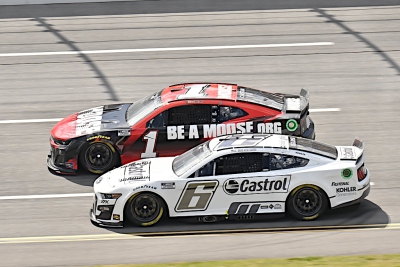 A late speeding penalty set Brad Keselowski off the pace in Sunday’s 500-mile race from Talladega Superspeedway, as he ultimately finished 23rd in the Castrol Carbon Neutral Ford Mustang.

The six-time Talladega winner was inside the top ten with 30 to go when green flag pit stops commenced, but Keselowski was caught speeding entering pit lane, resulting in a pass through penalty. A caution after would have likely given him the free pass, but the race surprisingly stayed green until the end, with Keselowski trapped a lap off the pace.

Overall six cautions were displayed throughout the afternoon, a couple of which the No. 6 narrowly avoided, as just over 20 cars finished running on the track when the checkered flag dropped.

The NASCAR Cup schedule heads to Dover Motor Speedway next, where race coverage next Sunday is set for 3 p.m. ET on FS1. Coverage can also be heard on PRN and SiriusXM Channel 90.