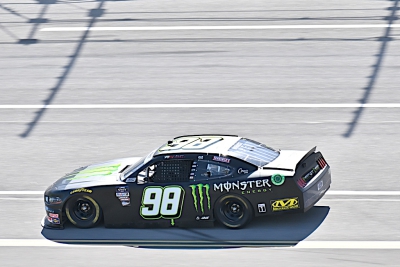 Riley Herbst employed a smart and savvy drive to finish seventh in the Ag-Pro 300 NASCAR Xfinity Series race Saturday at Talladega (Ala.) Superspeedway. The driver of the No. 98 Monster Energy Ford Mustang for Stewart-Haas Racing (SHR) dropped to the back of the 38-car field for an unapproved adjustment prior to the start, but Herbst wasted no time in working his way toward the front, hovering in or near the top-10. In the final stage, crew chief Richard Boswell made a strategy call on lap 69 while the race was under caution to pit Herbst for fuel only, which earned him the fifth-place starting spot when the race returned to green on lap 72. As the race made its way toward completion, Herbst endured three overtime restarts and avoided multiple wrecks to bring home his sixth top-10 of the season.

“It was a frustrating day. We were fast, but I just felt like we were lacking a little power. We would get up to the front and then get shuffled. Then I would work my way back up to the front. We didn’t earn any stage points. We had a shot to win there at the end, but I don't know. We just have to take what we can get. It was important that we did finish this race and get points to move on to Dover, which hasn’t been my best track. We’ll go to Dover and try to capitalize there.”

● Noah Gragson won the Ag-Pro 300 to score his seventh career Xfinity Series victory, his second of the season and his first at Talladega. His margin over second-place Jeffrey Earnhardt was .131 of a second.

● Twenty of the 38 drivers in the race finished on the lead lap.

● AJ Allmendinger remains the championship leader after Talladega with a 40-point advantage over second-place Gragson.

The next event on the NASCAR Xfinity Series schedule is the A-Game 200 on April 30 at Dover (Del.) Motor Speedway. The race starts at 1:30 p.m. EDT with live coverage provided by FS1 and SiriusXM NASCAR Radio.

Rate this item
(0 votes)
Tweet
« NASCAR Rolls with “Goodyear 400” for Throwback Weekend; Debuts Vintage Race Tire NCS: What to watch for during the GEICO 500 at Talladega Superspeedway »