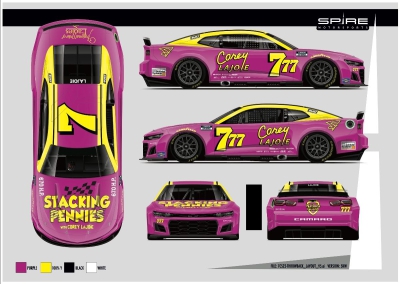 Corey LaJoie will pay tribute to late country-music star and former NASCAR competitor Marty Robbins with a vibrant pink and yellow paint scheme featuring Robbins’ No. 777 during the Official Throwback Weekend of NASCAR at Darlington Raceway.

The Official Throwback Weekend of NASCAR is beloved by the entire NASCAR industry for paying homage through special paint schemes to NASCAR Hall of Famers, legends, team owners and sponsors across the history of the sport.

LaJoie’s Spire Motorsports Chevrolet Camaro ZL1 will showcase his podcast “Stacking Pennies with Corey LaJoie” on the hood and the Fraternal Order of Eagles (FOE) on the decklid during Darlington’s annual Mother’s Day Weekend festival of speed.

“I’ve always been intrigued by Marty Robbins and his stint in NASCAR during the ‘60s, ‘70s and early ‘80s,” said LaJoie. “It would’ve been comparable today if Morgan Wallen was lining up for the occasional Cup race in his spare time and running competitively. I love the 777 scheme of Marty Robbins’ Grand National car, so I’m glad NASCAR let us take some creative liberty and allowing us to utilize three numbers for the throwback weekend. As always, our Spire Motorsports team answered the call and brought this vision to life.

“It’s even cooler to have Stacking Pennies on the hood. That podcast is such a huge part of what I do. Pair that with the Fraternal Order of Eagles founding Mother’s Day and having a presence on the car – it's going to be a really special tribute for me at Darlington.”

For more than a century, the second Sunday in May has been set aside to honor mothers everywhere - and it all started with a push from the FOE On February 7, 1904, FOE Past Grand Worthy President Frank E. Hering made a public plea to recognize mothers everywhere. A decade later, President Woodrow Wilson signed a proclamation making Mother’s Day a reality.

The achievement remains one of the most significant milestones in the history of the organization. From preparing brunch to buying cards and flowers, the spirit of Hering and the FOE lives on through America’s actions each Mother’s Day.

LaJoie has eight previous NCS starts at the “Track Too Tough To Tame” dating to 2017 and has completed just over 92 percent of the laps contested over that span.

In the series most recent visit to Darlington Raceway, he started 25th, raced competitively for the entirety of the 367-lap affair, and came away with a solid 15th-place finish.

“I’m always impressed with Corey’s creativity and commitment to honoring the pioneers of our sport during Darlington’s throwback weekend,” said Spire Motorsports co-owner T.J. Puchyr. “Last year we honored Alan Kulwicki with a paint scheme that was one of the best of the weekend. This year, Corey and our creative team raised the bar and absolutely knocked this design out of the park. We take a great deal of pride in what we bring to the track for this particular race, and this is proof positive of that philosophy.”

The Goodyear 400 from Darlington Raceway will be televised live on FS1 Sunday, May 8 beginning at 3:30 p.m. Eastern Daylight Time. The 12th of 36 races on the 2022 NCS schedule will be broadcast live on the Motor Racing Network and SiriusXM NASCAR Radio Channel 90.