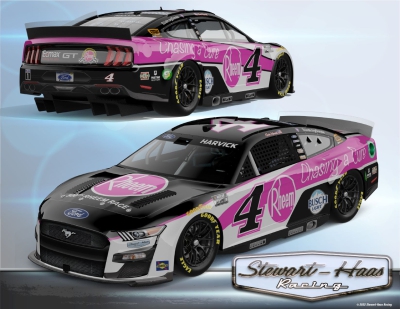 As Kevin Harvick chases a fourth NASCAR Cup Series victory at Darlington (S.C.) Raceway in the May 8 Goodyear 400, Rheem will promote its Chasing a Cure campaign to support cancer research by adding a touch of pink to Harvick’s No. 4 Rheem Ford Mustang.

On the Official Throwback Weekend of NASCAR, the pink-and-black design Harvick will sport at Darlington is a throwback to the liveries Harvick ran in October 2011 and October 2012 when Rheem first launched its Chasing a Cure campaign. In the 2022 edition, the primary beneficiary is St. Jude Children’s Research Hospital, with the No. 4 Rheem/Chasing a Cure Ford Mustang serving as a call to action for fans to support pediatric cancer research by visiting StJude.org/Donate. Meanwhile, Rheem’s Heart of Comfort program will donate $25,000 to St. Jude.

“When Rheem first got involved in NASCAR racing, Kevin, his wife DeLana, and our late friend Sue Karli, were three key foundational building blocks on which today’s Rheem Racing program is built. They were also critical to conceiving and nurturing the original Rheem Chasing a Cure campaign,” said Ed Raniszeski, executive director, Rheem Motorsports. “Having that beautiful pink paint scheme back on the track with Kevin at the wheel is truly what we believe the spirit of the Darlington Throwback Weekend on Mother’s Day is all about.”

Darlington also serves as a milestone for Rheem. America’s No. 1 water heating brand and major air conditioning and heating manufacturer is commemorating its 15th year in racing, and the Goodyear 400 marks its 500th race as a NASCAR sponsor.

“Bringing together our NASCAR sponsorship, our history with Kevin Harvick, and our community giving program on our 500th race makes Darlington Throwback Weekend very special for Rheem,” said Michelle Caldwell, senior manager, marketing, Rheem. “We’re proud to support St Jude Children’s Research Hospital and we ask our fans to join us in Chasing a Cure.”

Darlington marks the second of three races where Rheem is the primary partner for Harvick and the No. 4 team in 2022. Harvick carried Rheem to a 12th-place finish in its debut with Stewart-Haas Racing (SHR) on March 6 at Las Vegas Motor Speedway. After Darlington, Harvick will drive the No. 4 Rheem Ford Mustang again Sept. 11 at Kansas Speedway in Kansas City.

The pairing has reunited Rheem with Harvick, a relationship that began in 2007 when Harvick won the Daytona 500 in dramatic fashion, beating NASCAR Hall of Famer Mark Martin for the victory by .02 of a second in a frantic, green-white-checkered finish. It led to Rheem serving as a primary partner for Harvick’s NASCAR Xfinity Series team, Kevin Harvick Inc. (KHI), in 2008. Rheem’s debut with KHI came on May 2, 2008 at Richmond (Va.) Raceway where Harvick finished second in the Lipton Tea 250. Harvick delivered Rheem its first victory as a primary sponsor on Feb. 27, 2010 when he won the Sam’s Town 300 at Las Vegas. Rheem aligned as a primary partner with Harvick in the NASCAR Cup Series in 2011 and stayed with him through the 2013 season before Harvick joined SHR in 2014.

“It’s been 15 years since we first started working with Rheem and it’s great to be back with them,” Harvick said. “The NASCAR fan is their customer, and we’ve worked really hard to understand that relationship to ensure Rheem gets a good return on its investment. This year kind of throws it back to how it all began with Rheem being a primary sponsor on one of my racecars. I’m proud to carry their colors again in 2022.”