Burton Finishes 20th on the Dirt at Bristol 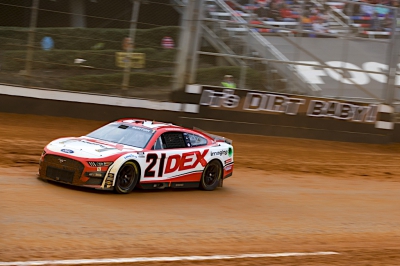 Despite his lack of experience racing on clay, rookie Harrison Burton and the No. 21 DEX Imaging team came away from Sunday’s Food City Dirt Race with a 20th-place finish.

Burton who qualified 24th, finished 27th in the first 75-lap Stage, then ended the second Stage in 24th.

He and the DEX team gained some track position by not pitting after the second Stage, and he was able to run mostly inside the top 20 for the remainder of a race that was stopped twice for rain but would up running the full 250-lap distance.

During one of the rain delays, Burton said in a TV interview that he was “as lost as last year’s Easter egg” trying to figure out dirt racing, but in reality his experiences on this Easter weekend showed that he and the DEX team were learning on the go.

He stayed on the lead lap for the entire race and steered his way clear of damage during several close calls on the track.

“This dirt stuff was really new to me,” Burton said. “I had really nothing to base this weekend off of.

“It was a tough one for sure, but I’m proud of the fight and willingness to learn in our group.”

Burton moved up one spot in the Cup Series driver points standings to 28th. He and the No. 21 team now head to Talladega Superspeedway for Sunday’s GEICO 500.