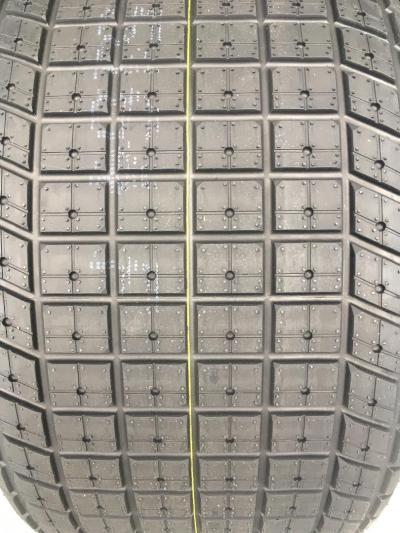 Set limits: 3 sets for practice, 1 set for qualifying and 6 sets for the race

Storyline – Many changes for year two on Bristol dirt: There are several significant changes to the tire set-up that the NASCAR Cup cars will run on the dirt surface at Bristol Motor Speedway this week.  In addition to the obvious construction changes in switching to an 18-inch bead diameter tire from the 15-inch tire Cup teams ran in 2021, these tires are radials, not bias ply.  Bias ply tires are generally more compliant than radials and better able to envelope the inconsistencies of the dirt surface.  Goodyear designed this 18-inch tire with the lower profile sidewall to behave similar to a bias ply, but with the size-matching capability of a radial.

“We had to develop a new package for the 18-inch dirt tire this season, so it gave us the opportunity to totally re-imagine this Cup tire set-up,” said Greg Stucker, Goodyear’s director of racing.  “We felt the right move was for a radial tire, which provides a greater degree of size consistency. However, a radial tire incorporates a much stiffer tread surface, so we made adjustments to the tire construction to achieve a more compliant feel, similar to that of a bias ply, and able to handle the irregularities of a dirt surface.  The 18” package also includes a new tread pattern which incorporates a lot of dirt tire technology we’ve developed over the years, and tread compounds adjusted to be more resistant to heat and wear.”

Notes – New tread pattern, switch to radial on 18-inch dirt tire: This is the debut of Goodyear’s 18-inch bead diameter dirt tires (photo attached) . . . these tires feature a different tread pattern from those run on Bristol dirt last season and different than on those being run by Camping World Truck Series teams this week . . . another main difference between this and the 2021 dirt tire is that this 18-inch version is a radial tire, not a bias ply . . . also, both this left- and right-side tire feature tread compound changes compared to last year (more heat and wear resistance) . . . Goodyear ran a tire test in preparation for this weekend at Lancaster (S.C.) Motor Speedway with Stewart Friesen in a Next Gen car this past December 9 . . . this tire set-up was was also confirmed in a NASCAR test with Friesen at Bristol last week (April 6) . . . as on most NASCAR ovals one mile or less in length, teams will not run inner liners in their tires on the Bristol dirt track.

Notes – Truck teams return to Bristol dirt track with same tire set-up as last season: Camping World Truck Series teams will be running two new Goodyear tire codes compared to what they ran last season on the Bristol dirt track . . . both the left- and right-side tires feature tread compound changes to be more heat and wear resistant . . . these Truck Series dirt tires differ in three major ways from the “normal” asphalt/concrete tire that Truck teams run – (1) the tread is not slick, but features a block-style tread pattern to help grip and evacuate the dirt, (2) they are not radials, but bias ply and are more compliant and able to envelope the irregularities of the dirt surface, and (3) the size of this right-side tire is similar to what teams are accustomed to running, but this left-side tire is significantly shorter to build in more stagger between the left- and right-side tires . . . as on most NASCAR ovals one mile or less in length, teams will not run inner liners in their tires on the Bristol dirt track.