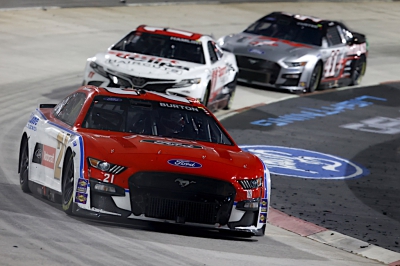 Harrison Burton and the No. 21 Motorcraft/Quick Lane team left Martinsville Speedway Saturday night disappointed in their run in the Blue-Emu 400 but determined to get their 2022 Cup Series season back on track.

Burton struggled from the beginning of the 400-lap run after starting 29th. His qualifying effort on Friday was derailed when he slid his left-front tire on his opening lap, hurting his speed on both laps.

Having to start in the rear on Saturday on NASCAR’s shortest track, it was almost inevitable that he’d get lapped early, unless he was fortunate enough to get a timely caution flag.

That didn’t happen and he lost a lap to the leaders. After a single round of adjustments at the stage break, the team was able to improve the Mustang’s speed and keep pace through the end of stage two, not losing an additional lap. A bizarre set of events during the only green flag pit stop where the air hose was stuck under the right front tire cost an extra sixteen seconds. Combining that and an eventual yellow flag during the cycle cost the team two additional laps.  The race progressed and with one final caution Harrison was able to gain three spots, finishing 26th and leaving the track 29th in the driver points standings.

Eddie Wood said that despite what transpired Saturday night, his driver and the Motorcraft/Quick Lane team are much better than what they’ve shown in recent weeks.

“Harrison has proven in the Xfinity Series that he can win races,” Wood said. “And our race team is capable of much better. We made the Playoffs in 2020 and almost made the cut last year.”

“We have the resources we need, and we are more determined than ever to get this thing turned around.”

Wood said he and his family-owned team have been down before in their decades in the sport but have always found a way to bounce back.

“Among the things I’ve learned is that there’s no point in making excuses,” he said. “You just have to keep working hard, and eventually it’ll start clicking and you start getting the results you expect when you have the support we have from Ford and Motorcraft/Quick Lane and DEX and the other companies that sponsor us.”

Next up for Burton and the Wood Brothers is a Sunday night dirt-track race at Bristol Motor Speedway.