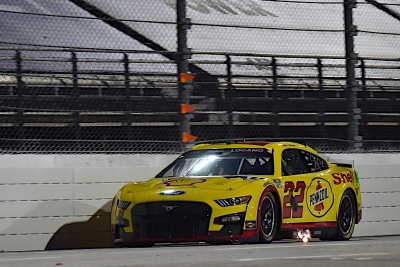 JOEY LOGANO, No. 22 Shell/Pennzoil Ford Mustang – COULD YOU HAVE DONE ANYTHING DIFFERENTLY?  “I could have tried to hit him harder.  That might have been what I needed to do.  William did a good job of executing up front on the restart there.  I was able to get to him because he made a mistake off of four taking the white flag and I thought, ‘OK, this is my chance.’  My car didn’t fire off real fast, but kind of gave me the opportunity to get to him.  I got to him and kind of rooted him up a little bit and then he came back down and just brake-checked me pretty good at the two-thirds as he should.  I’m not mad about that.  He should do that and that just killed my momentum off of two and gapped me by two car lengths almost into the final corner.  I was too far back to get to him at that point, so I just hate being that close.  It was a solid run for our car today.  Our Mustang was solid, especially on the long haul.  We just didn’t fire off as fast as we needed to and it kind of came down to that at the end.”

WAS TAKING THE OUTSIDE YOUR BEST CHANCE?  “Yeah.  The 3 took the inside so he left the front row open and had to take that.  I think the 3 made the right move by going down there for the restart.  I was expecting the 3 was gonna go in there and punt the 24 and I was gonna be stuck on the outside or it was gonna work out really good for me.  I wasn’t sure how that was gonna work out.”

WHAT DID YOU THINK OF THE RACING?  DID THE WEATHER PLAY A FACTOR IN NOT BEING ABLE TO PASS?  “A little bit of both.  This car, if you’re directly behind them it’s no secret this car is worse in dirty air.  If you’re not directly behind them, you’re able to recover better but it seems like the way cars were into the corner and the way the track wasn’t taking rubber it just made the bottom be the dominant lane.  You couldn’t move up the racetrack and stern across or do anything to try to pass them.  You really just got stuck.”

IN THE PRESEASON PEOPLE THOUGHT SHORT TRACKS WOULD BE A CHALLENGE WITH THIS CAR.  “I don’t think the racing was bad, but it was definitely harder to pass.  I don’t think anyone could really pass without putting a bumper to somebody.  It was a lot more challenging and it’s harder to get there.  I was faster than the 3 the whole run and I couldn’t get there.  I was almost there and would get tight and burn my front tires off, cool them back down and make another run at it, but I just couldn’t get to him to try to make the move.  It was harder than I thought it would be to pass.  I thought it would be harder, but not that much harder.”

RYAN BLANEY, No. 12 Advance Auto Parts Ford Mustang -- “It was overall a decent night.  We had a pretty fast car, but never got out front and never got to where we could race for the lead.  You have to be a half-second faster than somebody to pass somebody.  You’d run someone down by four seconds and then get stuck behind them, so that was pretty disappointing.  Overall, it was a really good night.  I thought our car was fast, just never got the lead or even got a chance at the lead.  Overall, not a bad night.”

WAS IT SIMILAR TO RICHMOND?  “Yeah, similar to Richmond.  I didn’t think they were very good following a car, either.  They kind of struggled, so it’s pretty unfortunate that was happening here.”

COULD GOODYEAR BE A LITTLE MORE AGGRESSIVE IN NOVEMBER?  “Probably.  Probably get the left sides wearing a little bit more.  The left sides just don’t wear on this car.  That’s just kind of how it is, so I know they’ve been playing around with softer lefts and things like that, so go for it.  I mean, go way softer, especially on the lefts and see where it gets you.”

WOULD MORE HORSEPOWER POTENTIALLY MAKE PASSING EASIER?  “Yes, it definitely wouldn’t have hurt it.  You could spin tires pretty good late in runs – like with 80 laps on your stuff you could spin tires – but if you were just in dirty air behind the guy on exit too, so you were spinning tires just as bad even though if you thought you had better drive than him.  It all starts in the middle of the corner of being able to roll to guys and then pick up the gas kind of with them, so that’s the thing you need, but more horsepower wouldn’t have hurt.  There was a lot of shifting tonight.  I didn’t run one lap without shifting, so that was a lot of shifts.  More horsepower definitely wouldn’t hurt, but I don’t think it’s the whole issue.”

DID THE INCREASE SHIFTING PLAY A ROLE IN BEING HARDER TO PASS?  “I don’t know.  It’s kind of hard to tell.  Everyone is like, ‘Oh, you’re shifting and you should be able to get runs on guys.’  Well, everyone is shifting.  The guy in front of you is shifting, so you can’t get a run on the guy who is doing the same thing as you are, so I don’t know.  I don’t know if the shifting part really played a role.  It’s really what you had to do.  If you had tried to run in fourth, you were going nowhere.”

ARIC ALMIROLA, No. 10 Smithfield Spirals Ford Mustang – “We had a great Smithfield Spiral Ham Ford Mustang tonight.  It was a challenge at times.  The track position game was so tough.  I mean, everybody would just start running the same speed after about 30 laps, but our car would take off OK and then it would just build looser and looser in.  I rolled the middle good enough and I launched off the corner good, but I couldn’t quite keep the pace as those guys that were ahead of us.  All in all, it was a solid night for us, bouncing back after a couple finishes that weren’t great, so Drew and all the boys have been doing a good job.  Hopefully, we can get back on a string of running up front because if we run up front, we’ll have a shot to win.”

CHASE BRISCOE, No. 14 Mahindra Tractors Ford Mustang – “I wish I could get my qualifying lap back after seeing how crucial track position was.  That was definitely unfortunate.  I wish it would have turned out better.  We continued to make the car better and was able to make some passes and was really good on the long run, so we’ll see if we can apply anything when we come back later in the year.  Overall, it was great to get another top 10.”

AUSTIN CINDRIC, No. 2 Menards/Moen Ford Mustang – “It was a super solid race for our Menards/Moen Ford Mustang.  The guys had great pit stops all night.  We had really good speed.  I felt like we were decent enough on the short run and could hold on better than most on the long run to get some more spots and ran in the top 10 almost the entire night.  We got pretty unlucky with some traffic under green flag stops and put us behind with not enough laps to recover.  Overall, a representative effort plus or minus a few positions for this group, so I’m proud to be able to do my part.”