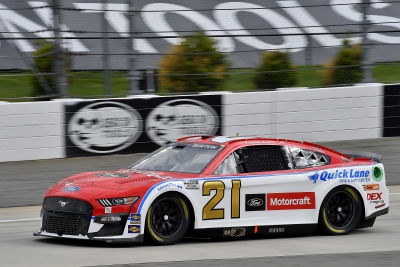 Harrison Burton and the No. 21 Motorcraft/Quick Lane Mustang are set to start 29th in Saturday night’s Blue-Emu 400 at Martinsville Speedway.

Burton was poised to move up the speed chart during qualifying but slid his left-front tire on his first lap, which hurt his speed for both laps. Still, he bettered his speed from practice, touring the tight half-mile oval at 94.050 mph.

Saturday’s 400-lapper is the first points-paying short-track race on the 2022 Cup Series schedule and the first night race.

The Blue-Emu 400 is set to get the green flag just after 7:30 p.m. Eastern Time with TV coverage on FOX Sports One.