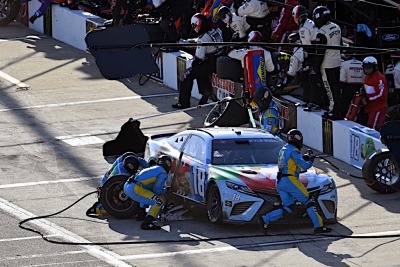 When Martinsville (Va.) Speedway officials began installing lights in late 2016 to be used for the 2017 season and beyond, they had aspirations to one day run a NASCAR Cup Series event that started and ended under those lights. That vision became a reality in 2019, when it was announced that there would be a true night race on the half-mile, paperclip-shaped oval in May of 2020, which subsequently was delayed until the summer due to the pandemic.

Fast forward to this weekend and, with changes in the schedule that have occurred since that 2020 debut of night racing there, Martinsville finds itself hosting the first of just three Saturday-night races this season, the Blue-Emu Maximum Pain Relief 400.

Kyle Busch, driver of the No. 18 M&M’S Crunchy Cookie Toyota Camry for Joe Gibbs Racing (JGR), heads to the .526-mile short track for 400 laps of racing Saturday night after a strong runner-up finish there last fall.

In addition to his most recent run there, Busch has some impressive statistics at Martinsville. In his last 14 starts there, Busch has two wins to go with nine top-five finishes and 11 top-10s as the M&M’S Crunchy Cookie driver is a staple at the front of the field at the Virginia short track. Martinsville was a much bigger challenge for Busch earlier in his career, especially during his early years racing under the JGR banner. In fact, Busch finished outside the top-10 in three of his first four races there with JGR in 2008 and 2009, but has come into his own at Martinsville, starting with his first championship season in 2015.

Busch will no doubt shine bright under the lights with the scheme for the new M&M’S Crunchy Cookie product adorning his No. 18 Toyota for the second of seven races this season. M&M’S Crunchy Cookie combines two favorite treats – M&M’S and chocolate chip cookies – and is now available nationwide. It’s bound to give race fans a fun, nostalgic snack to enjoy during this weekend’s race. M&M’S is also partnering with a cool cookie creator, Milk Bar’s Christina Tosi, to create 100, one-time-only, limited-edition cookies that will be made available to race fans on a first-come, first-served basis. Fans can sign up at MMS.com to find out when they’ll drop.

So as Busch and the rest of his NASCAR Cup Series competitors head to Martinsville for first night race of the season, the two-time Cup Series champion is hoping to be in the spot that will shine brightest at Martinsville – victory lane.