Black’s Tire Back on Board with Gray, DGR for NCWTS at Martinsville 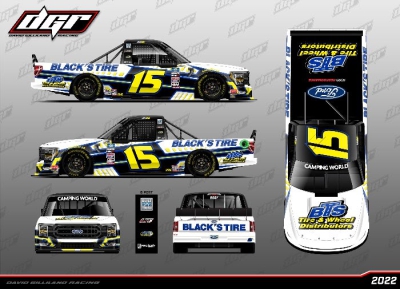 For nearly a decade the yellow, black and blue of Black’s Tire was a fixture in the NASCAR Camping World Truck Series (NCWTS) at Martinsville Speedway.

After a few years away from the venerable .526-mile track, the colors are returning - this time on the David Gilliland Racing No. 15 Black’s Tire Ford F-150 driven by Tanner Gray.

“We have had a really great start to the season so far and that all started with Black’s Tire on the truck at Daytona,” Gray said. “I am excited to have Black’s Tire back on the truck for Martinsville. It’s one of my favorite tracks on the schedule and I am confident we can contend for the win.”

Artesia, N.M.-native Gray finished fourth in the season-opening NextEra Energy 250 with Black’s Tire on the truck and currently sits fourth in the NCWTS standings.

Black’s Tire has always been a supporter of the Gilliland family. David Gilliland raced under the Black’s Tire colors in both the NCWTS and the NASCAR Cup Series, initially for Ricky Benton Racing and for DGR in 2020 and 2021.

The past two seasons, Black’s Tire backed Todd Gilliland in the NCWTS with Front Row Motorsports and will be on his NASCAR Cup Series No. 38 Ford Mustang for two races this year in Richmond, Va. and Darlington, S.C.

Tanner Gray and the Black’s Tire No. 15 Ford F-150 team take the green flag at Martinsville Speedway for the Blue-Emu Maximum Pain Relief 200 at 8 p.m. EDT Thursday, April 7. FS1 has the TV broadcast, and the race can be heard on MRN Radio and SiriusXM channel 88.