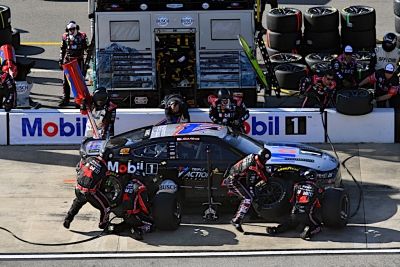 KEVIN HARVICK, No. 4 Mobil 1 Triple Action Formula Ford Mustang – YOU WERE CHASING HAMLIN DOWN AND JUST FELL A LITTLE BIT SHORT.  “Yeah, I’m just really proud of everyone on our Mobil 1 Ford Mustang for just staying in there and having a great strategy and doing everything that they did all day.  It was really the first clean day that we’ve had all year.  The cars have been fast and had a shot there at the end.  I wanted to be close enough with the white to just take a swipe at him, but the lapped cars kind of got in the way and I lost a little bit of ground.  Still, it’s a great day for us and hopefully a little bit of momentum in a positive direction.”

STAGE POINTS IN ALL THREE STAGES FOR A SOLID DAY.  “Yeah, it was a good day.  We kept chipping away at it and they had the right strategy to win the race and just wound up one short.  We finally had a day where nothing went wrong.”

IF WE WENT A LITTLE LONGER WHAT WOULD HAVE BEEN THE RESULT?  “That wouldn’t have mattered.  The race is what it is as far as distance.  I’m just really proud of everyone on our Mobil 1 Ford Mustang.  They did a great job.  I was hoping to have a shot there when we took the white to be close enough to at least get to his bumper, but I got stuck behind a couple lapped cars there and never really had a chance.  It’s still a great day for us.  The cars have run good all year.  It’s really the first clean day that we’ve had with nothing going wrong, so that’s a good thing.”

WHAT IS THE TAKEAWAY WITH THIS CAR ON A SHORT TRACK?  “We’ve run good at both of them, so hopefully that continues.”

RYAN BLANEY, No. 12 Menards/Richmond Water Heaters Ford Mustang -- “It’s tough.  There were a handful of cars that could kind of run up and run in traffic pretty good and we just weren’t really good enough to run in traffic.  Once we lost track position I struggled a little bit, but it’s nice to win a stage.  It’s cool to get the pole and good stage points.  We finished seventh, my best finish here.  Overall, a fun day.  It was kind of frustrating because we were running so good early.  I wanted to run better, but I can’t complain about it too much.  Overall, not a bad day.  We just have to find a little bit more speed, but it was nice that we kind of put together some decent notes and have an OK run at Richmond.”

YOU HAD A BACK AND FORTH WITH THE 1.  HOW DID YOU VIEW THAT EXCHANGE?  “I was inside of him into three and I kind of got loose and washed up half a lane and we never touched.  I went down into one and he just decided to send me, so the next restart I sent him, so now we’re even, I guess.”

CHASE BRISCOE, No. 14 Mahindra Tractors Ford Mustang – “We obviously had a really good starting position, but in the beginning we fought a lot of balance issues and I think we fell all the way to 28th from fifth.  It wasn’t looking the greatest, but we just continued to get our car better.  That’s definitely the farthest off we’ve been all year and to still be able to finish 11th is a good day.  We got lucky and got a quick caution and was able to get the lucky dog, and from there our car was actually driving pretty good and was able to drive up in the top five at one point.  We just tried the gamble strategy with the win already and it didn’t work out.  To finish 11th, we probably could have run a little bit better if our tires had held on a little bit more, but after being 25th at one point and a lap down with about 200 to go, we’ll definitely take it.”

HARRISON BURTON, No. 21 Motorcraft/Quick Lane Ford Mustang – “It’s frustrating because I feel like we were better than 18th, but track position is really hard to get here now.  We struggled with being aero tight behind guys, so it was really hard for me to kind of move forward throughout the run because of that.  I felt like we had a pretty decent Motorcraft/Quick Lane Ford Mustang.  If we keep going in this direction, I feel like we’re getting a little better every time.  It’s good to start running up with guys that we should be running with and building that direction.”

WHAT HAPPENED LATE WHEN YOU WERE THREE WIDE AND SMOKED THE TIRES?  “I’m not sure exactly what happened.  I know the 9, I think we were four-wide or something.  There’s just not a lot of room, so got hit and then smoked a tire, but, other than that, a pretty smooth day so we’ll take it.”