Naväge Nasal Care Ready to Clean the Competition with McDowell 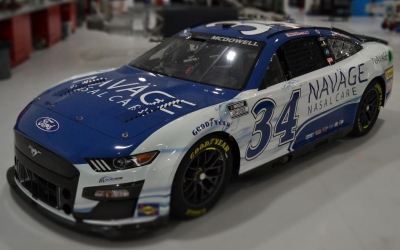 Continuing to introduce national brands to the NASCAR Cup Series, Front Row Motorsports (FRM) and RhinoSystems, Inc. (RSI) will debut the No. 34 Naväge Nasal Care Ford Mustang beginning this weekend at the Richmond (Va.) Raceway. The new partnership with Naväge and former Daytona 500 winner Michael McDowell will feature three more primary races including NASCAR Cup Series events at the Martinsville (Va.) Speedway in April, and at the Dover (Del.) Motor Speedway and Darlington (S.C.) Raceway in early May.

RSI is a leader in the saline nasal irrigation industry with over 75 issued patents worldwide. Naväge Nasal Care is the world’s only nasal irrigator with powered suction. As allergy season approaches there is no better time for this partnership with McDowell.

“As someone who’s always suffered from allergies, I use Naväge every day for drug-free relief. Naväge has helped me breathe clearly and feel healthier, so I’m thrilled about this new partnership,” said McDowell. “Pollen is very rough this time of year, and I want a healthy, natural way to control my allergies.”

The nose is the body’s air filter, and Naväge is an easy, all-natural way to clean your nose. Naväge uses suction to flush out mucus, allergens, and germs so you can breathe better, sleep deeper, snore less, and stay healthier. RSI has seen the increased awareness of the NASCAR Cup Series and is now excited to introduce Naväge to the sport’s growing number of fans.

“It’s a great time to enter the NASCAR Cup Series with a Daytona 500 winning team and driver,” said Martin Hoke, founder and president of RSI, the creator of Naväge. “The sport is seeing gains and we respect their innovations: we are so proud to enter this partnership. We hope people will try Naväge and experience great nasal hygiene. Naväge helps not only Michael, but his fans, too, and I happen to be one of them!”

According to McDowell, “This NASCAR season is more demanding than ever, with little to no breaks. Staying healthy as a NASCAR driver is important, and I can’t afford to be sick or take time off. Naväge helps ensure I’m as healthy as possible before I climb in the car to race.”