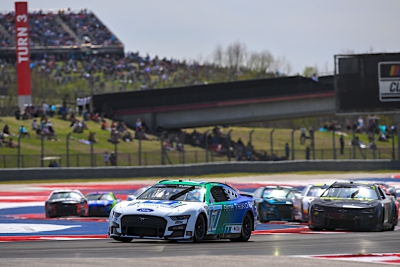 In a lengthy Sunday afternoon race from the 3.41-mile Circuit of the Americas (COTA), Chris Buescher drove his Fifth Third Bank Ford to a 21st-place finish.

The No. 17 team began the day from the 22nd spot after Saturday’s qualifying session. He would short-pit the opening 15-lap stage, crossing the line 24th to end stage one.

After the same strategy to end stage two, Buescher worked his way inside the top-15 for the middle portion of the race, at one point firing off 10th for a restart, but was unable to maintain the position,  ultimately finishing 21st.

The No. 17 team returns to action next weekend at Richmond Raceway. Race coverage Sunday is set for 2:30 p.m. ET on FOX, MRN and SiriusXM NASCAR Radio.