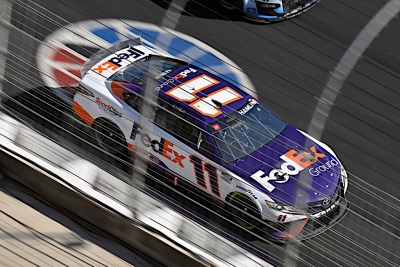 Atlanta Recap: The FedEx Racing team finished 29th in last Sunday’s race at Atlanta Motor Speedway after Hamlin was involved in an accident on lap 209. Prior to the misfortune, he established himself as a contender early as he charged from 15th to second in stage one. Hamlin suffered minor damage in a multi-car accident on lap 145 but rallied back into the top five late in the second segment. In the closing laps of stage two, the Chesterfield, Virginia native was involved in a two-car accident after his attempt to push Kyle Larson exiting turn four resulted in the No. 5 driver spinning and sent both cars into the outside wall. The resulting damage to the No. 11 Camry ended the FedEx team’s day.

COTA Debut: Hamlin started 19th and finished 14th in last season’s inaugural visit to Circuit of the Americas in Austin, Texas. The event was marred by heavy rain and eventually deemed an official race 14 laps short of the scheduled 68-lap distance.

Road Racing Stats: The No. 11 driver has earned one road course victory (Watkins Glen 2016) in his NASCAR Cup Series career. In 39 career starts on road courses, Hamlin has posted 13 top-five finishes, 19 top-10s, 193 laps led and a 15.1-avearge finish. Since being paired with crew chief Chris Gabehart in 2019, Hamlin’s stats have been even more impressive with seven top-five finishes, eight top-10s, 85 laps led and an 8.9-average finish in 12 starts. He also secured his first career NASCAR Xfinity Series victory on the Autodromo Hermanos Rodriguez road course in Mexico City back in 2006.

Track: Circuit of the Americas

Hamlin Conversation – Circuit of the Americas

Talk about going to COTA for the second time this weekend…

“I’m looking forward to it. Looking at the forecast, it looks a lot better than last year, so I think everyone is excited about that aspect. For our team, with how these first five races have gone, we’re ready to get to the track and get our season going in the right direction. We’ve had good speed almost every week and almost nothing to show for it. Plus, being the first time racing these cars on a road course, there’s a lot to learn because road courses play such a big part of our season now so this will be a big weekend and another opportunity to get things turned around.”