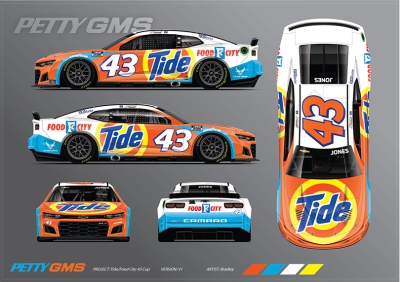 As the NASCAR Cup Series (NCS) returns to dirt for the second consecutive season, Petty GMS announced today a partnership with Food City, Gain, and Tide at a press conference at Bristol (Tenn.) Motor Speedway. For the NCS Food City Dirt Race on Sunday, April 17, the teammates will represent two cleaning champions - the freshness of Gain vs. the power of Tide. The No. 42 Chevrolet Camaro ZL1 driven by Ty Dillon will carry the Gain brand, while the No. 43 Chevrolet Camaro ZL1 piloted by Erik Jones will showcase the Tide brand as the primary partner.

After last season’s successful debut, Bristol Motor Speedway will once again be transformed from a high-banked concrete oval into a premier dirt racing showplace for the Food City Dirt Race. This will be only the second time that the Cup Series has been featured on dirt since September 30, 1970, when Richard Petty, current Petty GMS Chairman, and inaugural member of the NASCAR Hall of Fame, won at the North Carolina State Fairgrounds near Raleigh.

For the first time in NASCAR’s modern era (1972-present) and only the 12th time in history, the Cup Series will race on Easter Sunday, and of the 11 previous Easter races, five were also held on dirt tracks.

Gain’s bright green-and-orange color palette will adorn Dillon’s No. 42 Chevrolet, marking the brand’s return to NASCAR competition since 2018. The “Smell Ya Later!” design will feature Gain branding on the hood and sides.

“I’m excited to have Food City and Gain partnering with the No. 42 team for Bristol,” said Dillon. “Running on dirt last season was a fun experience and one that I’m looking forward to doing again. To have both of our Petty GMS Chevrolets carrying well-known laundry brands is a great opportunity for Erik and myself. Also, in my lifetime, we have never raced on Easter Sunday, so I’m looking forward to celebrating the special day with my family in a different way this season.”

Tide’s recognizable logo, the distinctive orange-and-yellow bullseye, is on the hood and sides of Jones’s No. 43 Chevrolet. The design, which is the same scheme the 25-year-old ran in 2021, includes a nod to Tide’s rich NASCAR history with the addition of the iconic Petty Blue. The duo will look to “Fight Dirty!” together as the series embarks on the dirt surface.

“To have Food City and Tide back on board our No. 43 Chevrolet for the Food City Dirt Race is a proud moment for our Petty GMS team,” Jones said. “We had a strong run, finishing ninth, last season in our Tide Camaro and hopefully we can improve even more on that effort next month. Food City and Tide have a storied history in our sport and I’m glad to continue being a part of the next chapter.”

To celebrate the partnership of one dirt track and two cleaning champions, Gain and Tide are teaming up with Food City and Petty GMS for the “Ultimate Dirt Race” Sweepstakes. Participates have the chance to win a $1,500 Visa gift card or other prizes. For complete rules, please visit www.foodcity.com.

The Food City Dirt Race at the Bristol Motor Speedway will be broadcast live on FOX on Sunday, April 17 at 7:00 p.m. (ET). It will also broadcast live on the Performance Racing Network (PRN) and SiriusXM NASCAR Radio.