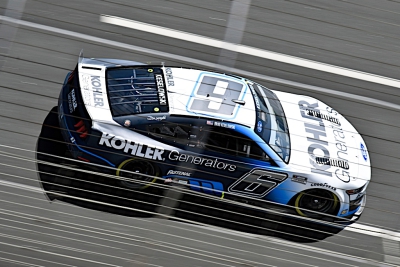 The NASCAR Cup Series took on the newly-repaved high banks of Atlanta Motor Speedway today for the Folds of Honor QuikTrip 500. Brad Keselowski began the day in his No. 6 KOHLER Generators Ford Mustang from the 36th position after the team was forced to drop to the back for unapproved adjustments prior to the green flag.

When the green flag waved, Keselowski quickly picked up a dozen spots, moving himself to 24th before the first caution for a single car incident in turn two. The competition caution would wave on lap 45. Under yellow, the No. 6 team was involved in an incident on pit road when a few cars stacked up in front of them, creating damage on the nose of Brad’s Ford as he was left with nowhere to go. The crew went to work quickly to make repairs with multiple trips to pit road under yellow, keeping Keselowski on the lead lap.

The caution flew again on lap 91, giving Brad’s team more time to make repairs to the front of his Mustang, which helped give the car competitive speed once again. After a pile-up on the front stretch that would close out stage one, The KOHLER Generators team would round it out in 29th. The team would stay out to gain track position for the start of stage two.

Keselowski sliced and diced his way in and out of the Top-10 for the entirety of stage two, which saw a total of four cautions, many for incidents that caused near calamity for the team. The team earned stage points at the end of stage two for a 5th place finish.

The final stage was set up to be a game of fuel mileage, with Brad restarting in the 14th position. When a late race caution came out on lap 253, the No. 6 came in to top off with fuel multiple times. A multi-car wreck on lap 301 would bring the No. 6 back down pit road for a four-tire strategy for grip during the final run to the checkered. Keselowski would bring the No. 6 home in 12th as the field wrecked across the finish line.

The NASCAR Cup Series heads to Circuit Of The Americas next Sunday, March 27th for the sixth race of the season, set for 2 p.m. ET on FOX, PRN and SiriusXM NASCAR Radio.