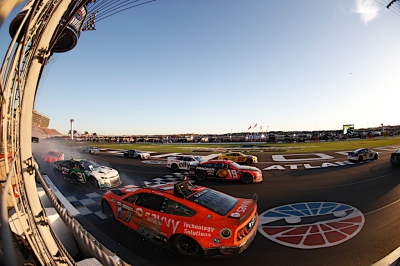 The No. 17 crew earned their second Top-10 finish of the 2022 NASCAR Cup Series season Sunday, fighting through 500 grueling miles at a newly-repaved Atlanta Motor Speedway that saw 12 caution flags.

Chris Buescher started the day from the 14th position, where he was calculated to start due to the poor weather on Friday rearranging the weekend schedule.  He found himself relegated to the mid-twenties for the first caution, which flew on lap 24.  The 17 team brought him down pit road for only two tires; fuel tank not permitted to be topped off until after the competition caution at lap 45.  Buescher remained P24 until the competition caution where he gained eight positions on pit road.  After a hard fought 44 laps, the caution flag flew once again with Buescher P25.  Scott Graves and the ITSavvy team elected to bring their Ford Mustang down pit road for fuel and tires, sending Buescher back three positions to P28 four laps before the conclusion of stage one.  The field raced hard for stage points, wrecking before the completion of stage one.  Under caution, Chris finished stage one P25.

Since the 17 car pitted under caution right before the stage break, Buescher found himself starting stage two on slightly used tires in P11.  The caution flag would fly for the sixth time at lap 145 following a big wreck out of turn four.  Chris was not involved, pitted for four tires and fuel, and restarted in the same position as the last caution.  Losing and gaining back several positions through two additional cautions, Buescher finished stage two P11, just outside of stage points.

The ITSavvy Ford dove down pit road during the stage break for four tires and fuel. This strategy call put Buescher back several positions to start the final stage of the race in P15 with 96 laps to go.  The final stage would only see three cautions, none of which involved the No. 17 on track.  Buescher was able to keep his ride out of danger, while clawing up to fifth.  During the final lap of the race the No. 17 was in position to grab at Top-5 finish, but ended up collected in the carnage that ensued off turn four. Buescher spun as just before the finish, sending him backwards across the line for a 7th place finish.

The NASCAR Cup Series heads to Circuit Of The Americas next Sunday, March 27th for the sixth race of the season, set for 2 p.m. ET on FOX, PRN and SiriusXM NASCAR Radio.