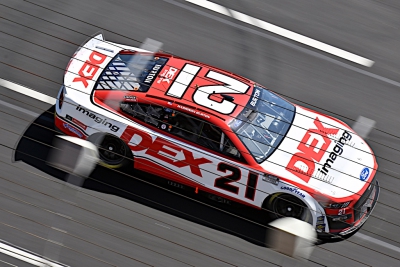 Harrison Burton and the No. 21 DEX Imaging team were among the numerous teams and drivers collected in crashes in the first Cup Series race on the reconfigured Atlanta Motor Speedway.

Burton was set to start Sunday’s Folds of Honor/QuikTrip 500 from 31st but had to move to the rear due to issues in pre-race inspection.

He battled a brake issue in the early going of the first Cup race since a remake of AMS, which now races more like Daytona or Talladega than the other intermediate-length tracks on the circuit.

His fortunes seemed to be improving until he was swept up in a multi-car melee on Lap 145 that left his DEX Imaging Mustang with significant suspension damage on the right front and right rear of the car.

From that point on, the team’s goal was to make it to the checkered flag. That was accomplished as Burton came home 25th in the 325-lap race.

“Considering the amount of damage to the car we were lucky to finish the race,” Wood said.

“Harrison did his part, and the crew did a good job getting the car back out there.

“They worked on it every pit stop, but you can only do so much in that situation.”

Next up for Burton and the No. 21 team is a trip to the Circuit of the Americas in Austin, Texas, for the Echopark Texas Grand Prix.