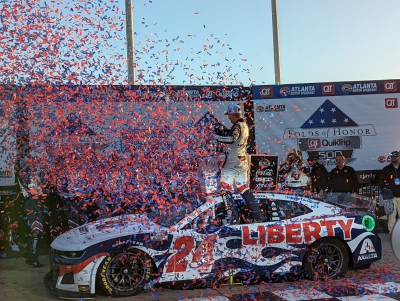 Fast paced and lead swapping set the tone with new cars on a newly configured track with five different leaders in the first 20 laps. This all came to a screeching halt when Noah Gragson driving this week for Kaulig Racing slammed the wall hard after getting loose with the car snapping hard right and straight on into the wall.

Back underway the swapping for the lead continued with five additional lead changes in the remaining few laps to the competition caution as Chase Elliott, Ross Chastain and William Byron all swapped the lead back and forth using a slingshot move perfected for superspeedway racing.

As stage one was coming to a close Ross Chastain who had been a front runner and leading had an issue along with Ky. Busch, Austin Dillon, Ty Dillon and Chase Briscoe all tangled which would bring the first stage to an end under caution.

“It was the end of Stage One. We were going to get a run down the front stretch right there, so I don’t know why he’s pushing dead center, at the three-quarter mark. It’s part of it I guess. It was fun racing there for a while.” said Austin Dillon

William Byron would take home the first stage win of the day but it would end with both Ty and Austin Dillon.

Mayhem would once again strike when Reddick running just outside of the leader would blow a right rear tire sending him spinning in front of the field that would collect 13 cars in total including Kurt Busch, Logano, Bell, Hamlin, Cindric, Larson and more.

As Reddick rejoined the field just as the race went back to green, parts flew off the No. 8 machine which benefited Chastain for the second time of the day getting the free pass putting him back on the lead lap after an earlier incident. However, Kyle Busch would once again return to pit road for more lengthy repairs to the car from the same incident that Chastain was involved in. This would leave Kyle Busch and the No. 18 team eight laps down.

Laps later Busch would pull his car off the track and drive it straight to the garage, park it and get out ending his day.

Tire issues would once again slow the race when Stenhouse blew a right rear tire on his car in an incident that would collect Austin Cindric, Erik Jones and Kevin Harvick. Harvick and Jones would fall victim to the incident while trying to avoid Stenhouse and Cindric wrecking but would tag one another. Stenhouse would take his car to the garage along with Cindric ending their day.

“You saw a few tires let go with people leading, running in the front. I don’t know if with all the speed we have here, if the right rear can’t hang on or what.” Said Stenhouse

“It was something I’d been watching and waiting for the entire race, the leaders getting wrecked. From my vantage point, just tried to slow down through the crash and got rear-ended by somebody. It’s just how it goes when there’s not a lot of room. This style of racing we’re all together and it’s a pretty large hit. It’s a shame to be out of the race.” Cindric on the incident with Stenhouse

With stage two coming to an end and Larson challenging Blaney for the lead with help from Hamlin, Larson would get turned in a bad bump draft from Hamlin turning him down onto Elliott and back up into the wall. This would allow Blaney to scoot away to take home the stage two win.

“We had a really fast FedEx Camry. I was just trying to help Kyle (Larson) there and I just needed to let him go off turn four. The track gets light there, the car starts to lift up and that’s where I needed to back off of him and I just didn’t and spun him out. It is a shame.” Said Hamlin

“We were just coming to the end of the stage. He (Denny Hamlin) was just trying to help me get a run down the front stretch. He just got to me in the corner and got me loose. I hate that happened, but it’s a product of this racing and product of pushing; trying to draft and get your lane going. Nothing is intentional.” Said Larson

With laps winding down racing began to pick up with the lead pack of William Byron trying to hold off both Bubba Wallace and Ryan Blaney by using the gap to keep them both close to prevent the run. Heading down the back Wallace would get way loose with Blaney getting into him. This allowed Byron to scoot away from the field and take home the victory.

"You know honestly the last few laps there, just trying to manage the gap to Bubba (Wallace) and trying to not get too far out front. My spotter Brandon (Lines), it’s his first win so congrats to him and just thanks to this whole team. They’ve done a great job this year. There’s a lot of changes with the Next Gen car." Said Byron

"I think these fans saw one heck of a race. It was certainly long from my seat. It was mentally taxing. Just thanks to all the fans for coming out. Been an awesome weekend" Continued Byron

Bell would initially be credited with a second-place finish, but NASCAR ruled he went below the line to advance his position on the final lap moving Ross Chastain up to second, Ku. Busch, Suarez and LaJoie would round out the top-five and Bell would finish the day in 23rd.

The NASCAR Cup Series moved on to COTA the first road course of the season next weekend for the Echopark Grand Prix at 3:30 p.m. ET on FOX.