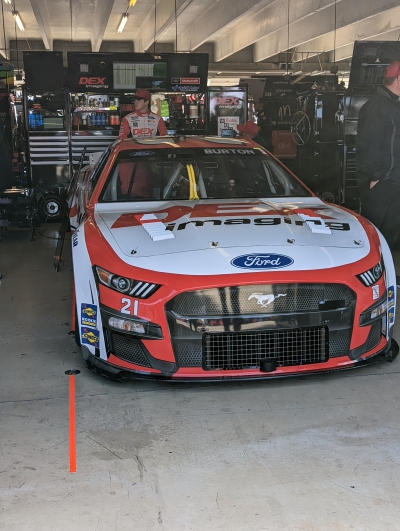 Harrison Burton and the No. 21 DEX Imaging Mustang posted the fourth-best time in Saturday’s practice session on the reconfigured Atlanta Motor Speedway.

Drivers, Burton included, used terms like “insane” and “wild” and “crazy” to describe the action on the track that has seen the banking in the turns increased from 24 to 28 degrees while the width of the surface has been reduced from 55 to 40 feet in the turns and 42 feet on the backstretch. The frontstretch has been widened to 61.5 feet.

With the Cup Series cars using a Talladega/Daytona horsepower and aero package, drivers ran in big packs during Saturday’s practice session, which was postponed from Friday to Saturday due to rain. That schedule change also means that the starting line-up was set by metrics based on recent results. Burton will start 31st.

“This new track is wild!” Burton said after Saturday’s practice, which saw him post a speed of 181.121 miles per hour on the 43rd of the 49 laps he ran. “It’s a super crazy racing style that was fun in practice.”

He said he feels good about his prospects for Sunday’s Fold of Honor/QuikTrip 500.

“I’d say our DEX Mustang is pretty good,” he said. “We just need some more stability and we should be good to go.”