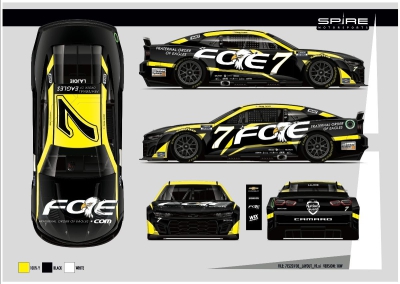 “We are thrilled to be able to continue our partnership with Spire Motorsports and now with Corey LaJoie in the Cup Series,” said Brian Rogers, Grand Worthy President of the Fraternal Order of Eagles. “Corey and the team represent what the Eagles are all about on and off the track and we’re excited for another great season together.”

​​“It’s always a fun weekend when we have the Fraternal Order of Eagles on board,” said Spire Motorsports co-owner T.J. Puchyr. “We won our first NASCAR Cup Series race together, so that’s obviously a historic moment for both of us. The Eagles always show great passion for the sport. Anytime we can showcase that organization, its members and their charitable and philanthropic efforts, we’re winning on and off the track, no matter what the scoreboard says. Atlanta Motor Speedway has been re-configured so we’re looking at a whole new racetrack. We know Corey LaJoie will rise to the occasion.”

As an active participant in benevolent endeavors, LaJoie is a natural fit for the F.O.E. His passion for charitable work has raised money for the Christian organization SamaritansFeet.org. He was acknowledged for his efforts with the 2019 National Motorsports Press Association (NMPA) distinguished Spirit Award. LaJoie is a staple on social media platforms, and he also hosts the podcast “Stacking Pennies.”

The phrase “stacking pennies” has become a life and career philosophy for LaJoie. Despite being the son of two-time NASCAR Xfinity Series Champion Randy LaJoie, the third-generation racer has charted his own trajectory in the sport and champions small accomplishments that add up to the sum of a larger victory.

“The Fraternal Order of Eagles has a great legacy in the sport,” explained LaJoie. “I’ve always admired its charitable initiatives and the organization’s desire to help those who need it the most. I’m excited to carry the iconic F.O.E. scheme in Atlanta this weekend. We’re looking forward to a solid run.”

The Folds of Honor Quik Trip 500 from Atlanta Motor Speedway will be televised live on FOX Sunday, March 20 beginning at 3 p.m. Eastern Daylight Time. The fifth of 36 races on the 2022 NCS calendar will be broadcast live on the Performance Racing Network and SiriusXM NASCAR Radio Channel 90.