Kyle Busch Starting Over at Atlanta 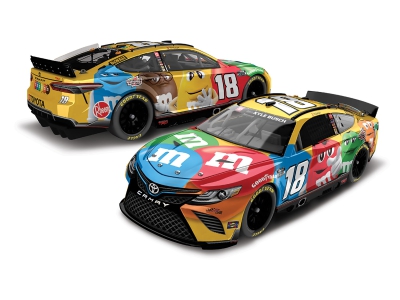 The NASCAR Cup Series heads to Atlanta Motor Speedway this weekend for the first of two races at the 1.54-mile oval this season. While the oval’s length remains the same, virtually every other aspect of the track that lies south of downtown Atlanta looks completely different than it did when the series last visited there in July.

Among the changes to Atlanta to go with new pavement to replace the worn-out surface are increases to its banking in the turns from 24 to 28 degrees, with the track width varying from 55 feet to 40 feet. The frontstretch width is now 52 feet, while the backstretch and turns are set at 42 and 40 feet wide, respectively.

What does this mean for the racing this weekend at Atlanta? It means the racing fans were used to seeing at Atlanta will look totally different and unlike any of the other 1.5-mile ovals on the schedule. While Atlanta is more than a mile less in length than Daytona (Fla.) International Speedway (2.5-mile oval)  and Talladega (Ala.) Superspeedway (2.66-mile oval), the changes expected to make the racing Atlanta look more like those two tracks than the traditional 1.5-mile track.

Never one to back down from a challenge, Kyle Busch, driver of the No. 18 M&M’S Toyota for Joe Gibbs Racing (JGR), will head to the new-look Atlanta to take on the new track surface and configuration, and what the racing on it may bring. While it’s designed to facilitate more pack-style racing, there are countless other unknowns thanks to not only the new layout, but because it’s just the fifth points-paying race for NASCAR’s new NextGen racecar.

Busch returns to the facility this weekend where the winning for him began with JGR in 2008. That was his first year with JGR, and he headed to Atlanta for the fourth Cup Series race of the season aiming to bring home the maiden victory for the team’s two new partners – Mars Wrigley with its SNICKERS brand, and Toyota. After leading a race-high 173 laps, Busch broke through for the first time in NASCAR’s top series for Toyota, which was in its second year of Cup Series competition and its first with JGR. Busch added an Atlanta Cup Series win in 2013 to go with eight top-five finishes and 11 top-10s over his career there.

So, as the Cup Series head to new-look Atlanta this weekend, Busch and the M&M’S team hope to be fast learners on a new surface with a new car in bringing home a third Cup Series win at the track. It would be extra sweet in this final year with M&M’S on board as a primary partner to win again at Atlanta with also would mark Busch’s milestone 60th Cup Series victory.