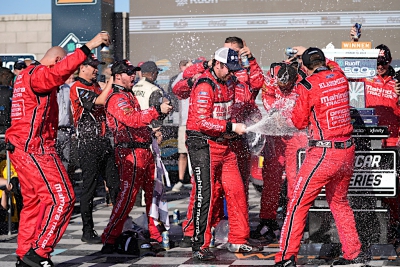 Chase Briscoe won the Ruoff Mortgage 500 race on Sunday, marking his first NASCAR Cup Series win and becoming NASCAR’s 200th different winner in the NASCAR Cup Series. This victory comes after 40 Cup series starts and being named Rookie of the Year in 2021.

“Congratulations to Ford Performance, Gene, Tony, John, Chase, and everyone at Stewart-Haas Racing for the win at Phoenix Raceway,” said Doug Yates, President and CEO of Roush Yates Engines. “Chase and John did an excellent job racing their way to the front of the field and maintaining the lead on those late race restarts.”

“I got to thank everyone that has gotten me to this point. Seven years ago, I was sleeping on couches, ready to give up. They gave me an opportunity and it's led to this. I am so blessed to be driving at the organization, the team, the car that was my hero growing up. To get this 14 back in Victory Lane, to do it with Mahindra Tractors, their first year in the sport, everybody that's believed in me. It's unbelievable” commented Briscoe.

Ryan Blaney started on the pole and led 138 of the first 185 laps while winning stage 2. The second half of the race saw Chase Briscoe in contention while leading a total of 101 laps. Briscoe was able to execute two restarts over the final 20 laps, holding off two other drivers who had never won a NASCAR Cup series race.

Kevin Harvick, who has won 9 times at Phoenix, took home his 18th straight top-10 at the track, tying with Richard Petty and Dale Earnhardt for most consecutive top-10s at a single track.

NASCAR returns from the west coast next weekend at the newly reconfigured and repaved Atlanta Motor Speedway in Atlanta, Georgia.