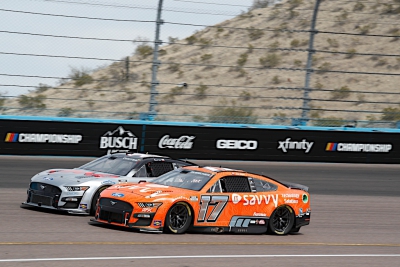 Chris Buescher began his day in the ITsavvy Ford Mustang from the 26th position, hovering around the mid-twenties before the competition caution flew on lap 25. On the restart, Buescher would work his way up five positions before another caution flew, this time for an incident. With a 10-lap dash to the green-checkered flag in stage one, Buescher drove up to the 15th position.

After pitting during the stage break, Chris would restart the race in 24th for stage two. By lap 100, the No. 17 ITsavvy Ford Mustang had moved up to the 20th position. The caution would fly again for a spin by the No. 20 car on lap 120. On the restart, Chris would pick up the 16th position and hold it for the next 62 laps to finish stage two.

The No. 17 would put Chris in the 15th position to begin the final stage, giving Chris the opportunity to drive up to 13th by lap 220, the highest he had been all day. A series of late-race cautions would ultimately set the field up for a three-lap dash to the checkered flag, with Buescher restarting P16.

Heading into the final corners before the checkered flag, a couple cars tangled in front of the No. 17, opening the gates for the team to close out the day in the 10th position. Sunday gave Chris Buescher his first top-10 finish at Phoenix Raceway, and as aforementioned, his first top-10 of the 2022 season.

The No. 17 team returns to action at the revamped Atlanta Motor Speedway next weekend, where Sunday’s race is set for 3 p.m. ET on FOX, PRN and SiriusXM NASCAR Radio.