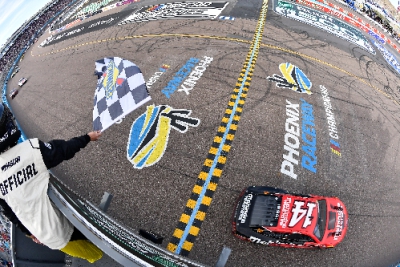 Chase Briscoe, driver of the No. 14 Mahindra Tractor Ford Mustang for Stewart Haas Raing, crossing the finish line first after leading 101 of the 312 laps in the Ruoff Mortgage 500k at Phoenix Raeway in Phoenix, Ariz. Getty Images

If you would have told me that by four races in the 2022 NASCAR Cup Series season, that we would have already had two first time winners, I would have thought you were crazy. But that's exactly what we have, with Cindric scoring the Daytona 500 win in his first full time season in Cup for the Captain Roger Penkse, and now Chase Briscoe, Driver of the No. 14 Mahindra Tractor Ford Mustang for Stewart Haas Racing winning in the Desert at Phoenix Raceway.

Briscoe led 101 of the 312 laps in today's Ruoff Mortgage 500k, and had to hold off a very win hungry Ross Chastain and Tyler Reddick in order to get his first win in his Cup career. I thought on the last two restarts, I feel like that was probably the worst-case scenario for me,” quoted Briscoe. “Ross and Tyler are two of the most aggressive guys on restarts. Fourth you had Kevin, who obviously has been a year, year and a half since he won, so you know he’s hungry, too. I knew that as long as I drove in there deeper than everybody else, I probably was going to be okay. Those two other guys, they were giving everything they had, too.”

As this was Briscoes first win in the Cup Series, this was also Johnny Klausmeier’s third win in Cup. His previous two other victories came with Kurt Busch in 2016 when Klausmeier was subbing for regular full-time Crew Chief Tony Gibson at the time in the first Pocono race, and also in 2018 with Aric Almirola at the fall Talladega race. Klasumeier had this to say about Briscoes driving on the final three laps en route to his first win. “That's what I expect out of Chase, 100% all the time. He’s going to put it on the line, find the limit. Sometimes it’s good. Sometimes it’s bad. Today it all worked out.”

Chase was also asked about what it was like to put the No. 14 car back in victory lane, after being driven previously by his three time Cup Series champion car owner Tony Stewart.

“First off, he said congratulations,” Briscoe explained. “They actually won the Gator Nationals today in the drag racing deals, so he was pretty excited. You could hear dragsters going off in the background. I just told him thank you for believing in me and giving me an opportunity to drive that car. That car is obviously his, and he has a lot of passion and drive for that car and to take a chance on another guy, kind of like himself, a dirt sprint car. We grew up 45 minutes apart. My dad raced against Tony Stewart in sprint cars. I was literally a diehard Tony Stewart fan growing up and a diehard 14 fan, so for me to add my name to the list of guys that have got the 14 car to Victory Lane is definitely special for me. Looking back, when I was six, seven years old and wearing the Tony Stewart helmet and uniform, I never in a million years thought I would get the 14 car in Victory Lane in the Cup Series, and it was cool for him to call and hear how excited he was.”

Top 10 finishers of Sunday's race at Phoenix Raceway were Chase Briscoe finishing first, then Ross Chastain scoring a second place finish, following up with Tyler Reddick who finished third. Fourth was the pole sitter of today's race, Ryan Blaney, then it was Kurt Busch with a top five finish. Following the first Busch brother was nine time winner of this race Kevin Harvick in six place, with the other Busch brother, Kyle, with a seventh place finish. Joey Logano scored a top 10 with an eighth place finish, with following behind was the other Team Trackouse teammate, Daniel Suarez, and wrapping up the top 10 was Chris Buescher.

Next weekend, the Cup Series takes on the newly repaved and reconfigurated Atlanta Motor Speedway. The 1.5 mile track is expected to race like a miniature Daytona and Talladega race, with its added banking from 24 degrees to 28 degrees, as well as the double yellow line rule being inplace. Coverage for the Folds of Honor Quiktrip 500 will begin at 3 p.m. Eastern Time on FOX for TV, and PRN for radio coverage.