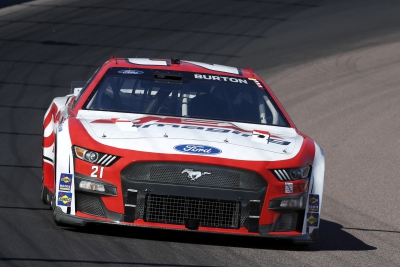 The No. 21 DEX Imaging team unloaded a fast Ford Mustang at Phoenix Raceway, where the Ruoff Mortgage 500k will be run on Sunday afternoon.

In Saturday’s brief practice session, Harrison Burton posted the 12th best speed of the session on his third lap, touring the one-mile track a 130.001 miles per hour.

The rookie’s first 10 laps on the track in a Cup Series car saw him post the 10th-best speed for 10 consecutive laps. His average speed over those 10 laps was 129.139 mph.

Burton and the DEX Imaging team picked up a bit of speed in qualifying, turning the track a 130.091 mph, but other drivers and teams found a bit more speed between practice and qualifying. When all was said and done, Burton had earned the 24th starting spot.

“Just missed it,” Burton posted on Twitter. “Bad lap on my end, but the 12th in practice has me optimistic for the race run.”