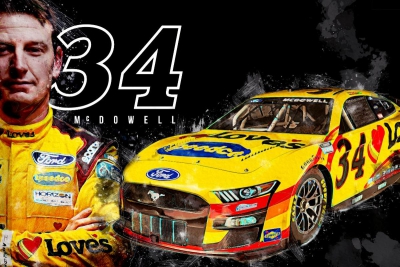 Arizona is home to not only NASCAR's championship weekend, but also driver Michael McDowell. The Glendale native who cut his teeth racing competitive bicycle motocross now returns again for the first of two visits to the Phoenix track this season, with Love's returning on his No. 34 Ford Mustang.

McDowell was a guest on this week’s Ford Zoom call and answered questions from the media.

MICHAEL MCDOWELL, No. 34 Love’s Travel Stops Ford Mustang – HOW WOULD YOU RATE THE NEXT GEN CAR VERSUS THE GEN 6 VERSION AFTER THREE RACES? “I thought the first few races here have gone really well. When we were all at that Charlotte test we were concerned, but Charlotte is one of those racetracks that dirty air and it’s just a tough place. It’s a tough place to pass, so we felt like that was probably one of the worst-case scenarios in that test, and then also too with everybody having very limited time with these cars – the teams always do a good job of making everything better and that’s what they do, so I feel like California was a great race. You start with Daytona, Daytona was like Daytona always is. I didn’t see much change there. The car has some different characteristics, but for the most part, how the race went is pretty much how the races have gone in the past. California, I thought the cars were really competitive and they were good in traffic. You see more side-by-side racing and when I say side-by-side I actually mean just closer proximity. The air doesn’t seem to affect these cars as much like when somebody is on your outside really tight, where with the previous generation car it would kind of suck you around and almost want to spin you out. So, if you were that outside car you sort of had to give a little bit of room and if you were that inside car, you had to protect that and now I feel like you can be pretty aggressive side-by-side and the cars drive pretty well. So, all in all, I’ve thought it’s been great. I think Vegas was good. I think California was good and those were the tracks that were probably the biggest question marks, the mile-and-a-half, two-mile tracks, so coming to a short track I think it’s just gonna get better because this car lends itself more to road courses, short tracks, it’s got big brakes and a bigger tire – all those things that will help on those racetracks that you can really attack, so I’ve thought it’s gone really well. I haven’t watched the Vegas race yet as far as playing it back to see how it was, but from my seat it was pretty good.”

WHAT IS THE KEY FOR YOU TO RUN WELL AT PHOENIX? “The key for us this week is just minimizing some mistakes and also some gremlins we’ve been fighting these last few weeks. Obviously, with this being a new car everybody is learning a lot in these first few races and we’ve had some issues that we’ve navigated through the first three weeks. Daytona wasn’t really much of an issue, but we’ve had good speed and our cars have been really fast, especially the first half of the race, so we just have to execute. We knew that there was gonna be things that sort of were not expected that with a new car you just kind of figure out and so we were having to make some adjustments, which is hard to do when you’re in the west coast swing because the cars aren’t going back and forth, so you really have a day in the shop before you load up and it has to be gone for the next one to do the swap out, so Phoenix in particular, I feel like, with the test that we had here last month, that’s gonna help a lot because most of us got an opportunity to feel things out and get our cars close and have at least some targets for simulation and all those things, so this weekend should go a little bit smoother than the last two, but for us it’s just cleaning up some of the details that we had some issues with the last two weeks.”

IS THERE MUCH YOU CAN TAKE FROM THIS FIRST PHOENIX RACE FOR THE SEASON FINALE OR DO THINGS CHANGE TOO MUCH BETWEEN NOW AND THEN? “That’s a big question mark. In general, you would say the evolution of the car is gonna be so fast and we’re gonna be learning so much that it probably won’t apply too much, but with what we’ve seen through the test and through the races that NASCAR has done a good job of developing this car in a window where the exploration hasn’t really paid off yet. We’ve tried a bunch of stuff in these tests and we’ve tried to get outside the box and nothing seems to really move the needle much as far as speed, so who knows? It could be that you run something pretty similar, but one thing that it does help for sure is pace helps the engineers back at the shop with simulation for the next time you come and tire fall off and all that, so you’re definitely gonna be building a notebook for sure, and it’ll be interesting to see once we get to the end of this summer how much the setups in cars have evolved.”

HOW COMFORTABLE HAVE YOU GOTTEN DRIVING THIS NEW CAR? “I don’t think anybody is super comfortable. The cars in general are pretty edgy. As we can see in practice and qualifying and the race, you can get behind and lose it pretty quickly, but every race that we do we’re all getting a little bit more comfortable and a little bit more confident of where that limit is, but with that short practice it is definitely a challenge firing off in kill mode and trying to be ten-tenths because each track is different with this Next Gen car. Normally, we have a pretty good notebook and have some ideas, so you ease into it a little bit throughout the weekend, but, for me, I feel really confident, especially by race time I felt like we had everything worked out. Our heights were good and everything was driving pretty nice, but you don’t let your guard down with this car, for sure. It can snap around really quickly.”

DO YOU FEEL MORE PRESSURE RACING AT HOME WITH FRIENDS AND FAMILY WATCHING? “You always want to perform well, but I don’t feel any extra pressure. More than anything, I just feel extra pressure because the last two weeks we haven’t got the results that I think we were capable of and this sport is all about momentum and it’s all about just building those results and confidence, so we need to capitalize. We’ve had the speed, so now if we can capitalize and get a result it just helps so much at the team and the morale and everything else, so the extra pressure is just wanting to run well and get that momentum going. Obviously, if you can do it at home it’s nice.”

IS THERE ANYTHING YOU’RE TRYING TO DO WITH YOUR FAMILY WHILE IN PHOENIX? “It’s been a fun week. It just worked out timing-wise. My kids are on spring break while we’re here in Phoenix. My wife and I are both from here and all of our family and friends are out here, so we haven’t really planned anything real big. We’ve just been hanging out with our family, so nothing too exciting. It’s been nice. It doesn’t always work out that way and with four kids, taking them out of school to do this would be tough, so it all worked out and aligned this year, so it was nice and just enjoying hanging out with friends and family and then obviously, like you said, the schedule is pretty easy. You get there Saturday and you have your qualifying and practice kind of all lumped together, so there’s not a whole lot of hanging out at the racetrack, so that makes it nice to be able to spend some more time, but at the same time it’s hard because you want to stay focused on what you’ve got going on and what you’ve got to do, but, right now, we’re enjoying it. I’m gonna go pick up my grandma here for lunch and just make the most of these days that we have here.”