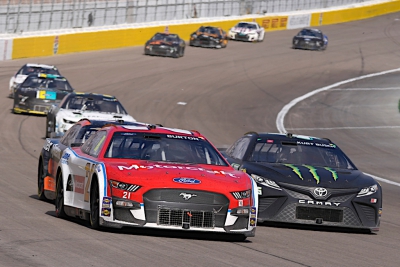 Harrison Burton and the No. 21 Motorcraft/Quick Lane team rode a late-race surge to a 16th-place finish in Sunday’s Pennzoil 400 at Las Vegas Motor Speedway.

Burton started the race from 19th place, and spent much of the race just outside the top 20. He had several close calls, which led to damage on the right rear of the No. 21 Mustang and a flat tire at one point.

The Motorcraft/Quick Lane crew rose to the occasion, made the necessary repairs and in the process also improved the handling of the car, even though poor track position often kept him from capitalizing on the improved performance.

The Pennzoil 400 ended with a green-white-checkered-flag, overtime run to the finish. Crew chief Brian Wilson elected to bring Burton to pit road for four fresh tires and fuel for the final laps.

The rookie driver then used some impressive moves in the final laps to make his way to 16th, his best running position of the day, at the checkered flag.

“I felt like we had a real up-and-down day,” Burton told reporters at the track after the race.

“And every time we would get any track position we seemed to lose it. It’s a track-position race and lots of challenges trying to pass, but overall it was a pretty decent day for us.

“The finish at least was better than where we had been at times and worse than what we had been quick enough to run at times.

He said it was important for him and the Motorcraft/Quick Lane team to be running at the checkered flag after being collected in crashes in the first two races of the season – at Daytona and Fontana.

“We actually finished the race and got some points,” he said. “We’re just trying to build towards the right direction as a group and trying to make our group better as quick as we can.”

The work continues next week at Phoenix Raceway.