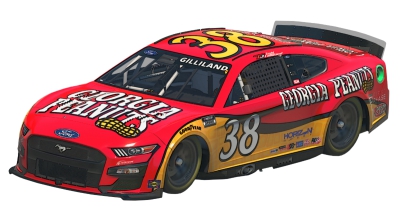 The Georgia Peanut Commission will return to Front Row Motorsports (FRM) to support NASCAR Cup Series Sunoco Rookie of the Year contender Todd Gilliland at two of NASCAR’s premier tracks in the southeast.

Georgia Peanuts will join Gilliland and the No. 38 Ford Mustang team at the newly repaved Atlanta Motor Speedway on March 20 and again at the Talladega Superspeedway in October. The Atlanta event will mark the 25th anniversary of Georgia Peanuts visiting victory lane in the ARCA Menards Series with driver Harris DeVane. The commission is looking once again to make memories with Gilliland.

“We’re proud to support Todd Gilliland this year in his rookie season,” said Joe Boddiford, Promotion Committee Chairman for the Georgia Peanut Commission. “And we’re excited to do it on the 25th anniversary of our last win at the Atlanta Motor Speedway. We hope that Todd can make more memories for us this season and look forward to his races with us.”

Gilliland will represent Georgia Peanuts, their farmers, and buyers throughout the season. The website, www.gapeanuts.com is the home for all NASCAR fans to learn more about the commission, download educational materials for the classroom, get health and nutrition information, recipe ideas and more.

The Georgia Peanut Commission conducts programs in the areas of promotion, research, and education. Funding is derived from a $2 per ton assessment on all producers. Peanuts are a $2.2 billion industry in Georgia and a vital part of the economy. Facts about the peanut industry in Georgia include:

Gilliland is honored to race the Georgia Peanuts colors in his rookie campaign.

“It’s really exciting to be able to represent Georgia Peanuts this year,” said Gilliland. “They have a lot of history in stock car racing and racing at the Atlanta Motor Speedway. I just want to continue that tradition and represent all the peanut farmers and the Georgia Peanuts brand to the best of my ability. It’s a great history to be a part of and continue.”