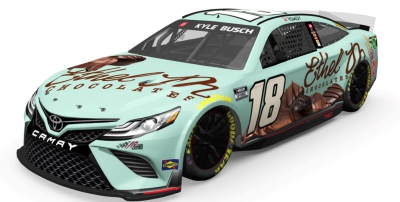 Kyle Busch is set to return to his hometown this weekend and another sweet piece of Las Vegas will be riding along with him once again.

Ethel M Chocolates is a marquis offering, manufactured by Mars Wrigley North America and dedicated to creating premium chocolates with fresh ingredients and no artificial preservatives.

Busch is focused on getting back to victory lane at Las Vegas after crossing an all-important hometown win of his checklist in 2009 in just his fifth NASCAR Cup Series start at his hometown track. He’s just missed out on a few other Las Vegas wins since then. This weekend, Busch looks to bring home career Cup Series win No. 60 to add to his growing list of accomplishments.

The 2002 honors graduate of Durango High School in Las Vegas would like to double his number of Cup Series wins at the desert track after having brought home that emotional first win there 13 years ago.

Driving the yellow M&M’S Toyota that day, Busch qualified on the pole but was forced to start at the rear of the field because the team needed to make an engine change during Friday practice. Unfazed, Busch remained patient on race day as he and the M&M’S team worked their way to the front of the field by the 54th lap. He went on to lead three times for 51 laps en route to claiming what he called at the time the biggest win of his young career.

While Busch has NASCAR Xfinity Series wins in 2016 and 2019 and Camping World Truck Series wins in 2018, 2019, and 2020 to go with his 2009 Cup Series win on the 1.5-mile oval, he already was no stranger to winning on Las Vegas Motor Speedway property. From 1999 to 2001, he earned more than 65 wins in Legends cars while racking up two track championships at the Bullring, which existed for several years before the NASCAR track was built. When Busch moved up to Late Models, his winning ways continued with 10 victories at the Bullring in 2001.

As he returns to Las Vegas this weekend, Busch is hoping the “Born in Las Vegas” connection will be just what he needs to celebrate along with Ethel M Chocolates, right at “home” in victory lane.